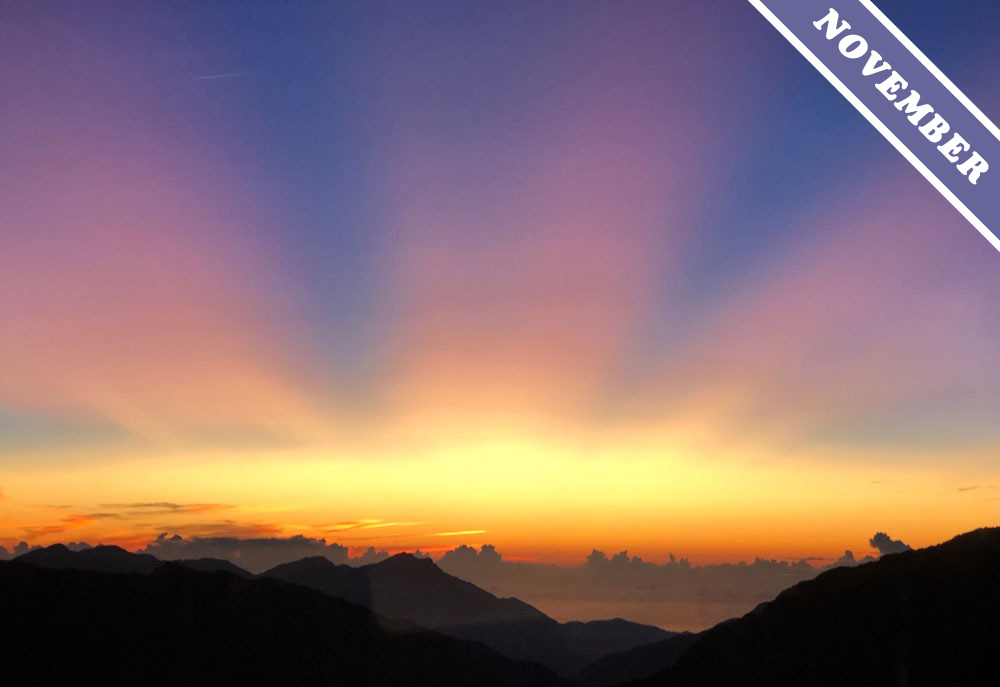 The Light and Shade of Cloudspotting

“The most beautiful thing in Nature,” wrote the nineteenth-century American naturalist Henry David Thoreau, “is the sun reflected from a tearful cloud.” He was right. The magnificence of our atmosphere comes from the interplay between sunlight and airborne moisture. Sometimes clouds reflect and block the light like solid objects floating weightlessly in the mid-heaven. Sometimes they diffuse the light like windblown veils of silk. The degree to which clouds look solid or translucent depends mostly on the form of water they’re made of – water droplets or crystals of ice.

Take the cloudscape spotted here by Peter Hsieh at sunset in Hualien County, Taiwan that we’ve chosen as Cloud of the Month for November. Beams of sunlight, known as crepuscular rays, spread out across the sky in a fan of purple and pink that appears soft and diffuse. The lines of sunlight and shadow look deliciously blurred. This is because they are being cast up onto a high cloud layer known as Cirrostratus, which is made of ice crystals. By contrast, the clouds on the horizon out at sea look crisp, solid and well defined. They are like castle turrets silhouetted against the setting Sun. These cloud towers are Stratocumulus and Cumulus congestus formations, which are low clouds consisting of liquid droplets of water rather than ice crystals. The droplets mean they block more of the sunlight, which is how the distant towers of cloud cast these shadows right across the sky.

Why should clouds of droplets look solid and clouds of ice crystals look translucent? It comes down to how plentiful the water particles are in each type of cloud. The particles of high clouds are ice crystals, which are typically larger and less plentiful. The particles of low clouds are liquid droplets, which tend to be smaller and more plentiful. High clouds look more translucent and wispy because they don’t have as many surfaces with which to scatter the sunlight. Low clouds appear more solid because they have an abundance of droplets, whose surfaces scatter the sunlight this way and that and ensure the cloud’s illuminated side appears bright while its shaded side looks dark.

The English travel writer H. V. Morton expressed the distinct difference in appearance of high and low clouds when in 1927 he described a day’s end in Beaulieu, Hampshire, England: “The sun was setting… in a blaze of splendour. There were two layers of cloud, one low and moving, the other high and stationary. The low clouds were indigo blue and stormy; the high a soft, apricot pink colour. The west was burning with gold light and the edges of the dark clouds were etched with thin lines of fire. In that hush, in that benediction of seconds before the first star shines, the universe seems waiting for a revelation, as if the clouds might part and Man know something of his destiny.”

Crepuscular rays caused by Cumulus congestus and Stratocumulus cloud casting shadows onto Cirrostratus above, spotted by Peter Hsieh over Hualien County, Taiwan. The Henry David Thoreau quotation is from his journal entry of Sept 7th 1851. The H. V. Morton quotation is from his book In Search of England (1927), and was suggested to us by Heather Silverwood (Member 42,036).