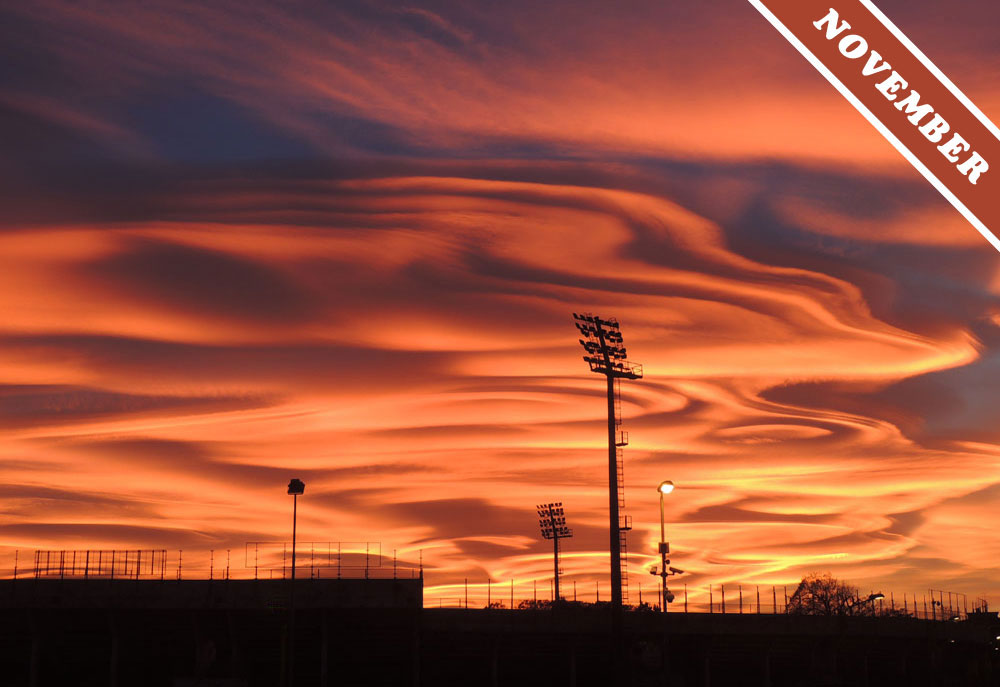 Contours of the Sky

There exists a sky version of those lines you see on maps to delineate the contours of mountain ranges. This sunset cloud formation was spotted by Enrico Comin (Member 38414) over Varese in the north of Italy. It is an example of lenticularis clouds. Named after the Latin for a lentil, lenticularis formations are more typically photographed in the form of individual lozenges or disks of cloud, which can sometimes look remarkably like flying saucers. But these clouds do sometimes have more continuous meandering shapes, as they did that evening, and this is when you can think of them like celestial contour lines.

Picked out by the glancing light and shade of a low Sun, the wavy outlines of the clouds result from the rising and dipping flow of stable airstreams. Just as the contour lines on a map represent the undulations of physical terrain, with each winding line delineating the ground of a particular elevation, so do these wavy cloud outlines reveal where the undulating air flows pass through the particular altitudes at which temperatures are right for cloud to form. The edges of the shapes resemble carved plywood because of the ‘stratified’ nature of the air, with layers of moister air separated by layers of dryer air. The layers flow en masse in an invisibly undulating terrain of winds, and because the cloud forms more readily in the moister layers than in the drier ones the clouds have the appearance of laminations.

Enrico Comin was not the only member of the Cloud Appreciation Society to notice the mesmerising lenticularis that evening. We received photographs from no less than twelve members in the region where Italy, France and Switzerland meet. The formation must have extended over a large area, rendering in vivid orange and purple the rolling flow of winds as they passed over the Alps. Last month, we talked of the many links between our oceans and our atmosphere. November’s Cloud of the Month reminds us beautifully that our atmosphere also flows in concert with the geological contours of the physical terrain below.

Altocumulus lenticularis at sunset over the Italian, French and Swiss Alps spotted from Varese, Italy, by Enrico Comin (Member 38414).