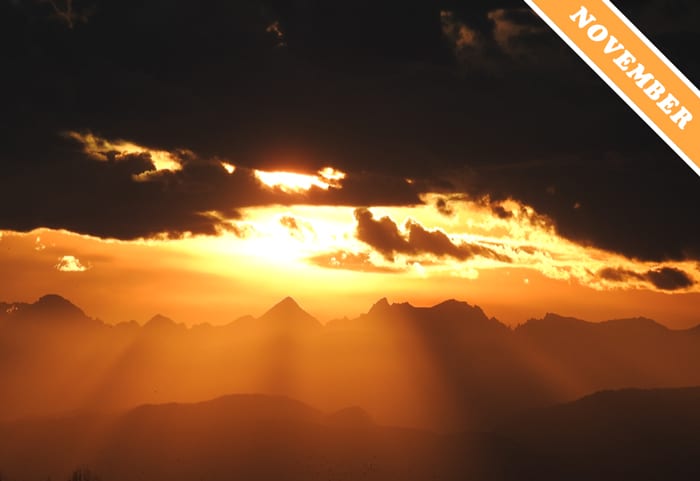 A Sunset with Searchlights

You know those glorious fingers of sunlight that sometimes burst out from behind clouds? They’re called ‘crepuscular rays’, they form when light and shadow are rendered visible by haze in the atmosphere and these photographed by Alli Bush over Fort Collins, Colorado, US, are the Cloud of the Month for November.

The haze giving rise to crepuscular rays can be due to the air being filled with fine particles such as sand, dust or pollen. Or it can result from a delicate mist of water droplets – plentiful enough to scatter the sunlight but too scarce to show up as a cloud. The scattering is the important bit. Since we only see light that shines directly into our eyes, rays of sunlight shining in other directions are not visible unless they encounter something that scatters light towards us. Think of shining a torch beam on a clear night. The light only appears where it strikes a surface such as the ground. But on a foggy night, the full torch beam shows up because some light is also scattered towards us by the droplets of fog in the air it passes through. This is why a hazy sky renders rays of sunlight visible.

The other requisite for crepuscular rays besides haze is something to cast the shadows. Most commonly it is a cloud blocking the sunlight that creates the regions of light and shadow we see in the sky. But the crepuscular rays in Alli’s photograph are cast not by clouds but by the peaks of the Rocky Mountains. The rays fan outwards because they are coming towards the camera. In fact, the Sun’s rays are actually pretty much parallel by the time they reach Earth. They only appear to spread out like this because of the effect of perspective. It is just like looking down the length of train tracks. Even though they are parallel, they appear to spread outwards the nearer they are. Only when the sun is high in the sky so that its rays are pointing more directly downwards do crespuscular rays look parallel.