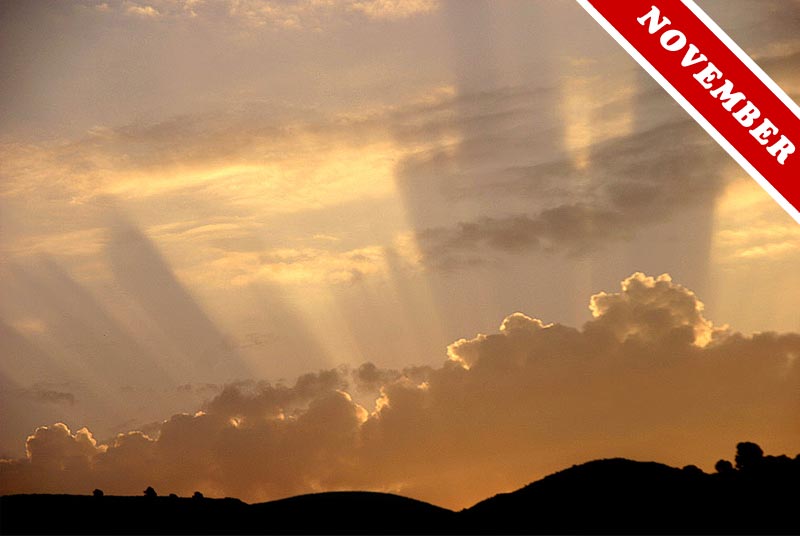 Have you ever noticed cloud-shaped shadows creeping over the ground on a sunny day? These can be cast by drifting Cumulus, as they are swept overhead in the breeze. Such shadows are a pleasing connection between sky and land. They might even catch the attention of those poor individuals who, blind to the beauty of the sky, walk around staring at their feet.

But the most dramatic and spectacular cloud shadows don’t actually reach the ground at all. They are the ones cast from one part of the sky to another.

You can’t beat cloud shadows to give a sense of perspective and scale to the atmosphere. Take these majestic ones cast at sunrise from the line of Cumulus towers on the horizon in November’s Cloud of the Month. Here the shadows aren’t cast down onto the ground, but onto a layer of Altocumulus, through which the Cumulus summits have grown.

The effect is rather like when you use your hands to make shadow shapes on the wall. But we are very pleased to say that the cloud version is considerably more beautiful and, in contrast to our own, it doesn’t inevitably end up producing the shape of bunnies, flying doves, or some mutant hybrid of the two.

Cloud shadows cast from Stratocumulus up to Altostratus spotted over Murcia, Spain by Steen Hastrup-Stilling (MEmber 9,009).