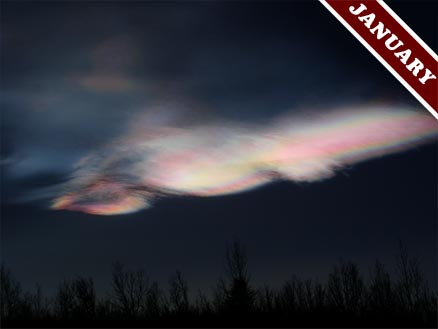 Most clouds are happy to coexist within the lower region of the atmosphere, known as the ‘troposphere’. Nacreous clouds, however, like to be a little different. They form in the rarefied heights of the stratosphere, and look down on the troposphere – what an obvious place it is for a cloud to exist.

Also known as mother-of-pearl clouds, Nacreous usually appear between 10 and 20 miles up, in the higher-latitude parts of the world. They are the most colourful-looking clouds, exhibiting refined and delicate pastel hues*, just as one would expect from such lofty individuals.

It seems these clouds are caused by waves of air penetrating the stratosphere, due to the effect of mountain ranges all the way down on the surface. They only tend to be spotted just before dawn and after dusk, when the lower sky is in shadow and the stratosphere is still lit up.

‘Let those common clouds jostle for people’s attention during the day,’ they no doubt whisper to each other.‘We would never lower ourselves to compete on such a overcrowded stage.’