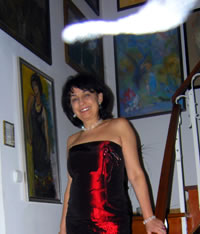 An unidentified flying cloud (UFC) has been spotted in Hungary.

It was long, thin, shaped like an outstretched arm and appeared briefly in the house of Gyula Somlai (member 8164), an architect living in Budapest.

Gyula says he was taking pictures of his wife in her new dress with his digital camera and was amazed to discover the cloudy shape in the images when he uploaded them to his PC.

“I attest to the fact that no artificial manipulation of any kind has occurred to the photos,” he said. “I have unsuccessfully consulted experts in photography and even researchers of inexplicable phenomena.”