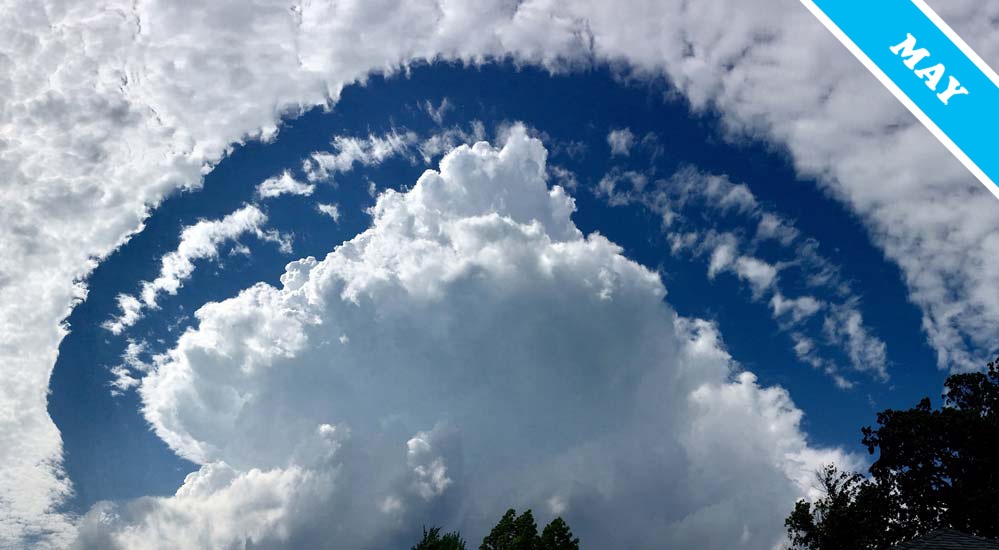 The Cumulus congestus cloud is a monument to convection. It is a Cumulus building up through unstable atmosphere with ever-quickening pace – the greatest stage of that crisp convection cloud before the droplets in its upper reaches all turn to ice, or ‘glaciate’, marking the moment the cloud has developed into the Cumulonimbus storm cloud.

Unlike the icy, fluffy-looking upper edges of a Cumulonimbus, the top of a Cumulus congestus appears crisp and well defined. It still resembles, though on a far larger scale, the cauliflower-like mounds atop the humble little humilis stage of its youth – back when Cumulus was just getting going. These distinctive mounds reveal how the currents of warm air rising within the cloud are given buoyancy with each water droplet that forms, releasing as it does so a tiny amount of heat into the surrounding air. These condensing droplets are the fuel that drives the convection process, causing the currents to keep floating faster and faster up through the clear, cold surrounding air.

The Cumulus congestus we’ve chosen as Cloud of the Month for May was spotted by Marissa Bunting (Member 42,677) over Thousand Island Park, New York, US. It has grown through a mid-level layer of Altocumulus, which appears to have parted to let it through. The Altocumulus had likely formed just beneath an invisible ceiling on cloud growth known as a ‘temperature inversion’. This is where the change in air temperature with altitude means that everyday clouds can’t easily grow up through it. But a Cumulus congestus at full throttle is not an everyday cloud. Sure, the air above that it lifted as it rose would initially have been held beneath the temperature inversion. Under that invisible ceiling or air, it would have spread outwards instead of upwards, sinking back at the edges, clearing away the Altocumulus layer as it did so. But a localised little temperature inversion like this is no match for the power of a Cumulus congestus. Upon reaching it, the cloud would have smashed right through, rising up within its Altocumulus halo, unstoppable in its glorious rise – upwards, upwards, the mighty monument to convection.