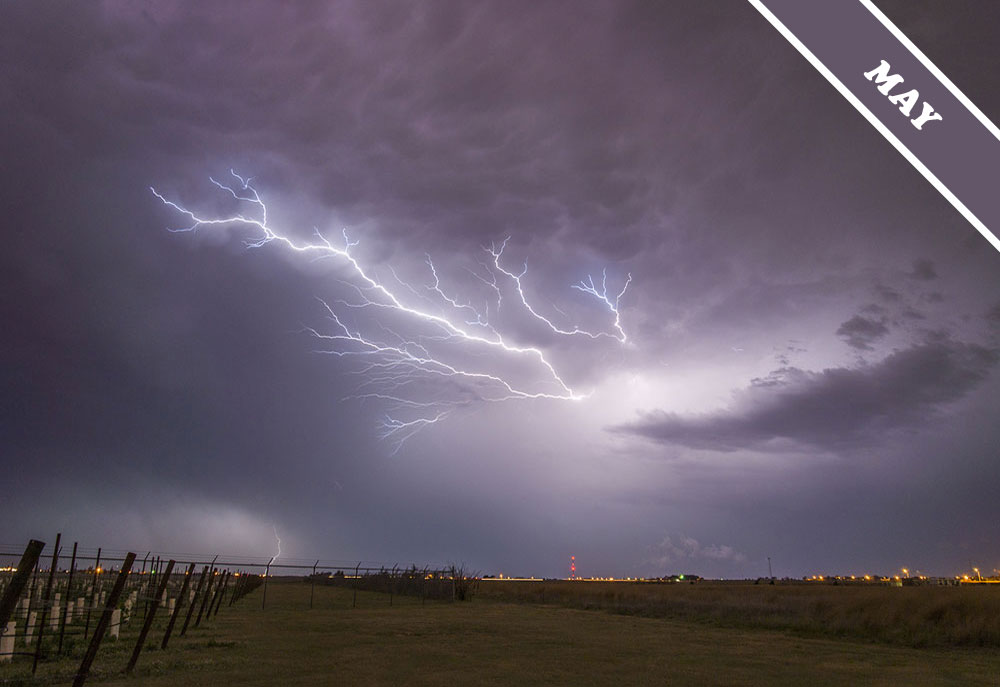 When we think of lightning, most of us picture a bolt shooting down to the ground from the base of a Cumulonimbus cloud. But such ‘cloud-to-ground’ lightning is not the most common form – that’s ‘within-cloud’ lightning, when the electrical discharge travels from one region to another within a storm cloud. Such lightning bolts tend to be hidden from view, their forking paths obscured by the body of the Cumulonimbus. As a result, most within-cloud lightning illuminates the cloud as a whole, making it flash and flicker in a diffuse way. Just occasionally, however, within-cloud lightning takes a path from one region of the cloud to another that hugs the outside of the Cumulonimbus. The lightning appears to crawl across the surface of the huge canopy, or ‘anvil’, spreading out at the top of the storm cloud. This form of ‘anvil crawler’ lightning features in our Cloud of the Month for May, which was photographed over Lubbock, Texas, US, by James Bowers (Member 34667). An anvil crawler typically spreads across the underside of the anvil to the rear of the storm. It sometimes happens at the same time as a cloud-to-ground strike elsewhere in the cloud. With its multi-branching paths, an anvil crawler appears to move more slowly than many other forms of lightning. The crawling movement is just visible to the naked eye as the wriggling fingers of current burrow out of view up into the stormy vaults above.

Katharine Towers, poet in residence at the Cloud Appreciation Society, has written a poem inspired by the Cloud of the Month for May. Here she introduces it:

There’s a green so new and sharp
it pains the heart – mine’s the beeches
on the road to Leam in Spring.
It pains because it’s bound
to sadden into ordinary summer
green, which really has no need of notice.
Last night I sat up late to watch
the lightning creak across the dark.
It poked about the innards of a cloud
and didn’t last, but left a sorrow
that a perfect thing was gone.