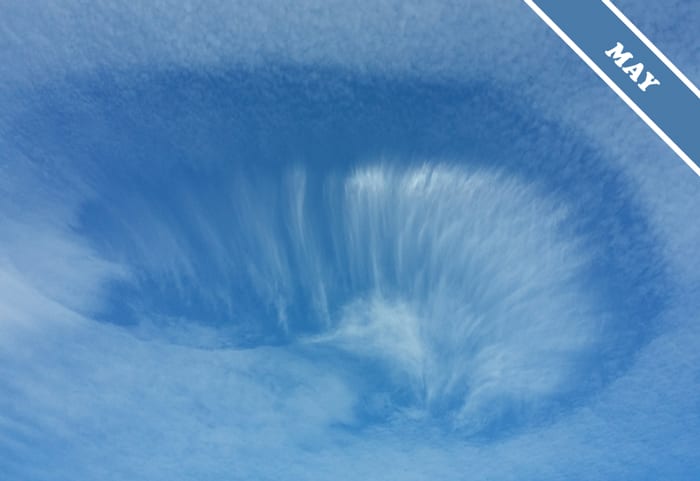 Low clouds like Cumulus tend to consist of water droplets. High ones like Cirrus are made of ice crystals. Mid-level clouds, like this Altocumulus we’ve chosen for May’s Cloud of the Month, often contain ‘supercooled’ water. The water is in liquid droplets, but it’s so cold that it can freeze at any moment setting off a chain reaction of freezing, which can result in a hole in the cloud layer like this one spotted by Craig Pledger over Key West, Florida, US.

It is known as a ‘fallstreak hole’, and it looks as if someone has taken an enormous cookie cutter to a cloud layer. Some people call it a ‘hole-punch cloud’. There is often a streak of cloud trailing beneath the hole. The formation is caused by the freezing of droplets in one region encouraging their neighbours to freeze in a reaction that spreads outwards in a circle.

Water is supercooled when it remains liquid despite being at temperatures below freezing. That may sound like an odd idea, but it is quite common in clouds. Their droplets can stubbornly to refuse to freeze at temperatures of –10, –15, even –20 degrees Celsius (14, 5 and -4 degrees Fahrenheit). Even at temperatures as low as this, the droplets won’t freeze unless there’s something solid in the air for them to freeze onto – perhaps tiny specs of dust, sand or ash floating around in the atmosphere. These tiny particles can act as ‘ice nuclei’ because they form the seeds onto which the supercooled water can start to freeze.