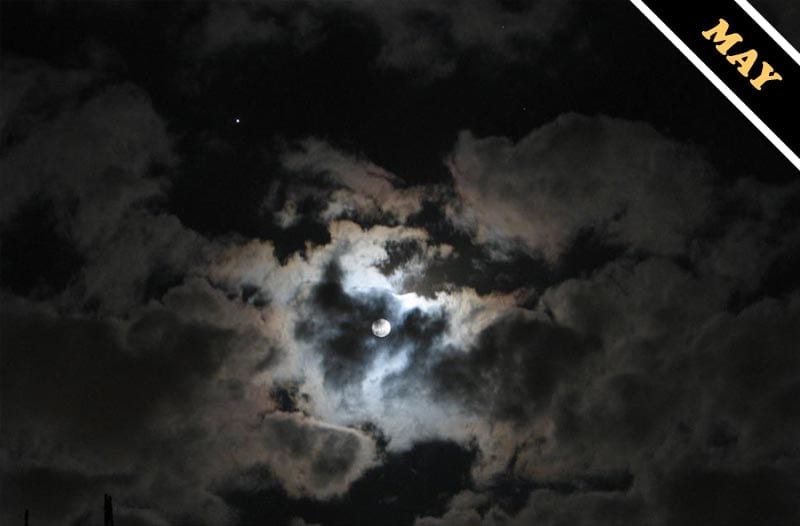 By the light of the silvery moon

There aren’t many images of clouds at night on the society gallery. Perhaps this is because the low light conditions present challenges for digital photography. Perhaps it is because cloudspotters like to go to bed early. Whatever the reason, we think that it is a shame, as the right sort of clouds lit by a full Moon is a sight of great beauty.

The high, streaked ice-crystal clouds, such as Cirrus, look glorious in the moonlight. Thin enough to let the light through with ease, they seem even more delicate and lace-like with a dark backdrop than they do during the day. But the best night clouds have to be Altocumulus – particularly those with gaps between their clumps, a variety known as ‘perlucidus’. If the Altocumulus layer is not too thick, the clumps of cloud develop a striking silvery glow, which is interspersed with inky rivers of the starry sky beyond.

And sometimes, as in these night-time clouds over Bangalore, India, the droplets of the Altocumulus cloud can diffract the moonlight to produce a fragmented ring of reddish colours, around a blue-white disc of light, which is known as a ‘corona’. As different clouds drift in the wind across the face of the Moon, these colours jump nearer or further from it, shifting position depending on the size of the cloud droplets.

Nothing beats a clear starry night when the Moon is less than full. But when it is shining at its brightest, the drifting schools of iridescent, silvery clouds are enough to make even astronomers, usually frustrated by the obstacle of clouds, put down their telescopes and admire the spectacle.

Altocumulus at night spotted over Bangalore, India by Monish Mathiaas.