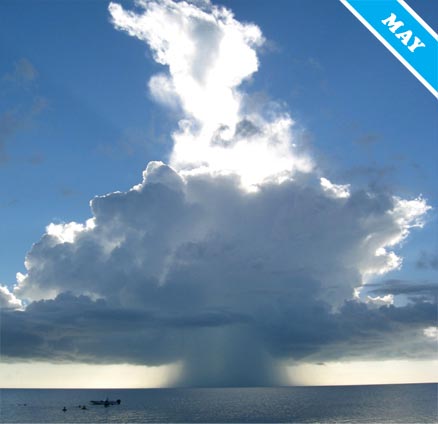 (Click image to enlarge) Photographed over Long Island, in The Bahamas © Dene Georgelin.
See this photo in the Cloud Gallery here.

The Cumulonimbus could never be called a refined cloud. It is the beast of the lower atmosphere: roaring with deafening thunder; spitting shards of lightning and hailstones; whipping up twisting tornadoes and spawning dramatic cloud features, such as the udder-shaped mammatus clouds, cigar-shaped roll clouds and, well, wall-shaped wall clouds. Sometimes, the Cumulonimbus also produces something called a ‘microburst’, which is best thought of as a cloud sneeze. Don’t be deceived by the ‘micro’ part: the sneeze of a Cumulonimbus is anything but restrained.

A microburst is a very localized column of air – up to 2.5 miles (4km) across – which shoots earthwards from the base of the cloud, spreading outwards with violent force upon reaching the ground. With gusting speeds of up to 150 mph, these winds can damage buildings, fell trees, and have been known to cause aviation crashes.

Much like human sneezes, microbursts can be either dry or wet. They do however last rather longer than ours: between 5 and 15 minutes. Along with chilly winds, the wet varieties produce sudden downpours. These can be quite heavy: enough to give you a cold, should you be in the firing line without the right clothing. Could the Cumulonimbus not muffle its vulgar microbursts? Presumably, no one has ever had the courage to try and teach this beast of the atmosphere any manners.