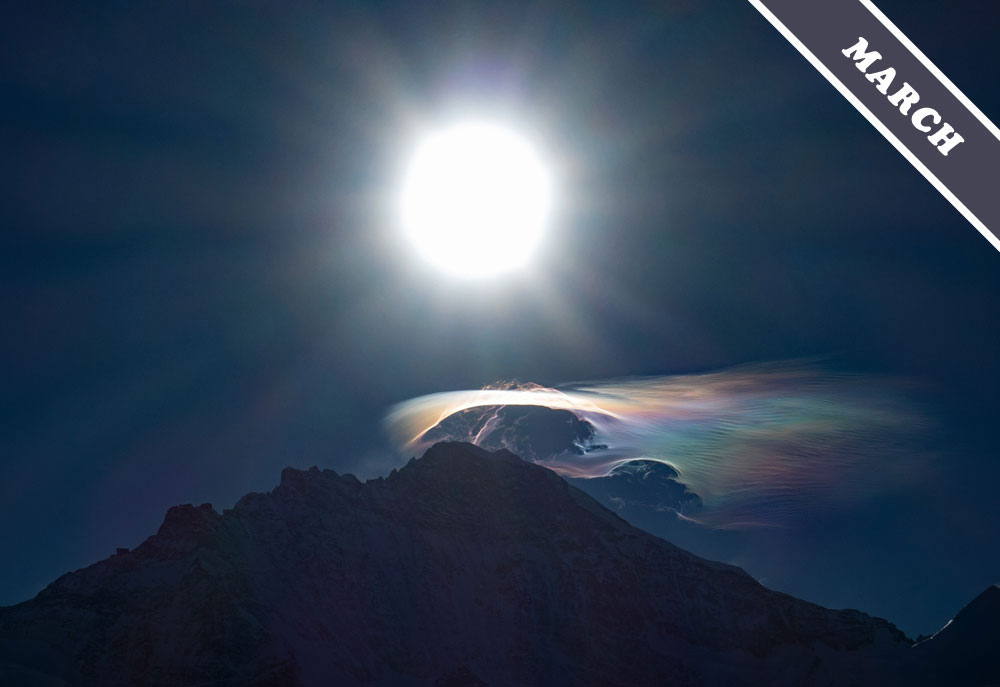 In the untamed twisting, turbulent air downwind of mountains, fine filigrees of cloud can form. A prominent peak like the Jungfrau in the Swiss Alps often produces formations known as ‘banner clouds’. These clouds can take the form of delicate streaks and twirls of condensation that stretch out in the lee of the mountaintop. Cloud of the Month for March demonstrates two characteristic banner-cloud features: bands of pastel colours known as ‘cloud iridescence’ and holes that appear to have been punched out of the cloud. Both are often found in banner clouds.

When the cloud is particularly thin like this one, iridescent colours can appear as the sunlight that shines through gets ‘diffracted’. This is the name for how light waves bend slightly as they pass around tiny obstacles like cloud droplets. The amount by which the light bends depends on its wavelength. And so there can be a slight separating out of the different wavelengths of sunlight passing around the droplets. These then appear to us as separate colours. Cloud iridescence like this only shows when the cloud-droplet obstacles are both tiny and very consistent in size. When all the same size, the droplets all bend the light consistently, which means that their effects add up. This is why banner clouds can be great for producing cloud iridescence. Their droplets form only momentarily, appearing as the airflow cools briefly where its pressure drops just behind the peak, before they disappear again as it sweeps on and warms up again as its pressure returns to normal. They never hang around in the airflow long enough to grow in size. Nor do they have a chance to collide with each other enough for some grow larger than others. Tiny, even-sized drops – they are perfect for diffracting the light into bright, iridescent colours.

The hole-punch features are turbulence made visible. When the wind is strong, an abrupt obstacle like the Jungfrau mountain causes the airflow to develop powerful eddies just behind it. These invisible vortices interrupt the flow above, sucking down pockets of air here and there. These sinking pockets show up within the banner cloud above as holes – gaps where the turbulent eddies have dragged drier air down from above the cloud.

Not all banner clouds show these features. When there’s more moisture around, they just appear like Cumulus clouds hugging the mountainside for dear life. But if conditions are right, the fierce churn of mountain winds can produce what appear as one of the most delicate and lacy cloud formations of all.

Banner cloud showing iridescence spotted by James Williams over the Jungfrau in the Swiss Alps.