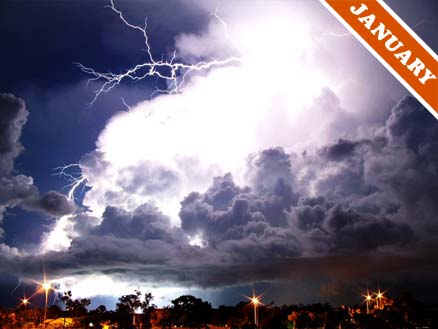 (Click image to enlarge) Photographed over Darwin, Australia © Jason Smith (see it in the gallery)

As this distribution of charge increases, it becomes more and more unstable. Suddenly, a massive rush of electricity – the lightning bolt – redistributes the charge. Thunder is the explosive expansion of the air which is heated extremely fast as it conducts the electricity.

There are a number of different types of lightning, many of which are being demonstrated by the flamboyant thundercloud shown above. ‘Sheet lightning’ is when a bolt is hidden by the body of the cloud, so that the whole cloud appears to light up as the light passes through it. ‘Forked lightning’ tends to be classified in terms of where it travels: ‘Cloud-to-ground’ (just visible at the bottom left corner of the photograph); ‘Cloud-to-cloud’ (at the top right); ‘Cloud-to-air’ (top centre); and ‘in cloud’ (which is what is causing the sheet lightning at the centre of the image).

On the whole, clouds are the more subtle manifestations of the weather. Theirs is usually an understated beauty, which is why it is so often overlooked. No wonder, then, they want to show off every once in a while with such explosive, heart-stopping fireworks.

One thought on “Lightning (January 08)”