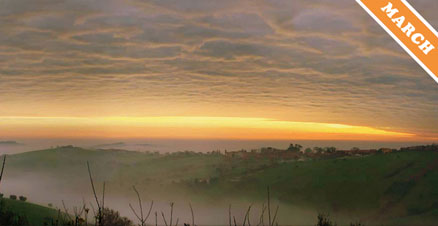 Sometimes a cloud will express itself more by its absence, than by its presence. It may do this by forming a hole in the shape of something (such as Graeme Ferris’s Blue Zombie). Or it may do it by turning into a cloud variety known as ‘lacunosus’, which is the latin for ‘full of holes’.

A lacunosus cloud looks rather like a loose honeycomb: a layer of rough gaps surrounded by cloud fringes. This formation can appear at all cloud levels, and tends to be more common at the high level (when it is known as Cirrocumulus lacunosus, see here, and here) and middle level (when it is called Altocumulus lacunosus, see here). But the fine example shown above, photographed over the Marche region of Italy, looks to be in the lower cloud level and so should be called Stratocumulus lacunosus. Its cloudy honeycomb holes appear a lot larger than those in the higher examples simply because they are closer to us.

Stop and take in the sweet sight of the lacunosus cloud whenever you come across it, for this is a transient species that will melt away before your eyes.