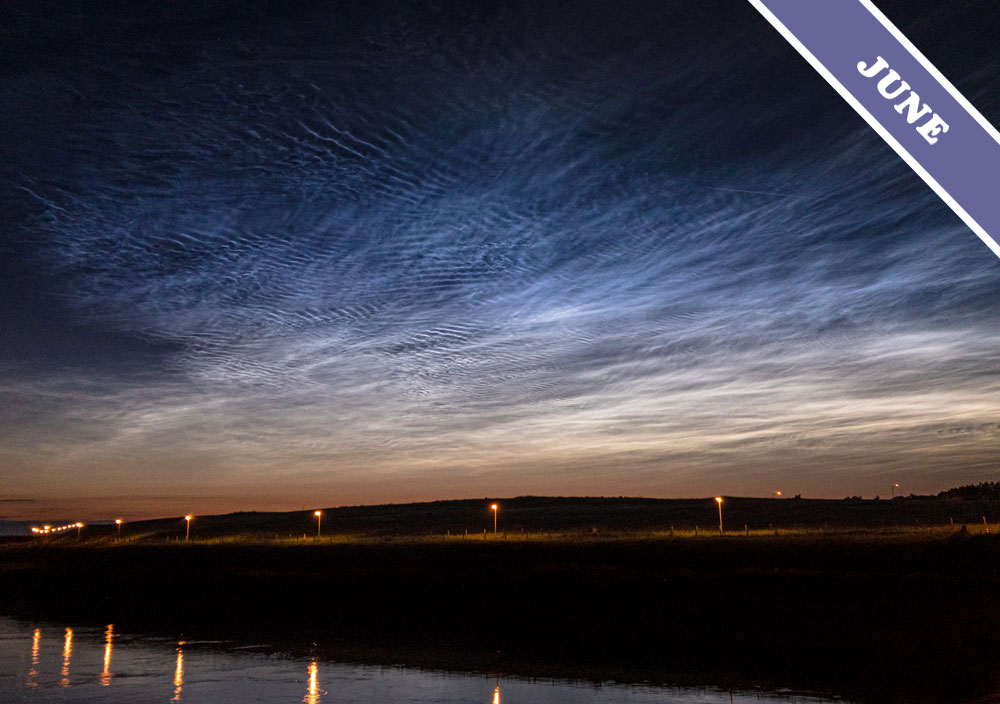 Anyone for night Cloudspotting?

A mysterious, rippling veil of gossamer-like clouds hangs high in the sky over the Netherlands. Forming right up at the fringes of Space, these clouds are the very highest in our atmosphere. They’re known as noctilucent clouds, and they form in the mesosphere at altitudes of around 50 miles (85 kilometres), which is far above the troposphere – the part where usual ‘weather’ clouds form, in the lower 10 miles or so (15 kilometers). It is the extreme altitude of noctilucent clouds that ensures they are the only type of cloud you can spot in the middle of the night even when there’s no Moon to light them. Even when the Sun is well below the horizon and rest of the sky is in the Earth’s shadow, these super-high clouds still catch its light, shining out in neon blue hues against the darkened sky. This is why their name means ‘night-shining’ in Latin.

Now is the start of the season for spotting noctilucent clouds in the Northern Hemisphere because they only form during the summer. June always seems to be a good month for them. This is when their ice crystals are more likely to appear because, counterintuitively, summer is when the mesosphere is at its coldest. When temperatures are warmer down on the ground, the lower atmosphere is warmed too and the troposphere expands, causing it to push the upper atmospheric layers upwards, which leads to cooling of the mesosphere. Typically, you can only spot noctilucent clouds from latitudes (whether in the Northern or Southern Hemisphere) that are higher than 50 degrees latitude. This explains their more formal name, polar mesospheric clouds. Any higher than about 70 degrees, however, and the summer sky will never become dark enough for their subtle forms to be visible.

If you are at the right latitude during the right time of year, look out when the lower sky is clear for these ghostly streaks of pale blue shining among the stars, late in the night or in the early hours. Who said cloudspotting needs to end when the Sun goes down?

Have you spotted a Noctilucent Cloud?

If you’ve managed to photograph one of these extremely high night-shining clouds, why not contribute your image to a new Noctilucent Cloud Showcase that we’re creating in collaboration with our friends at Go Stargazing? We plan to bring together the best noctiulcent cloud images as a new resource for nighttime cloudspotters.

Submit a image to our noctilucent cloud showcase