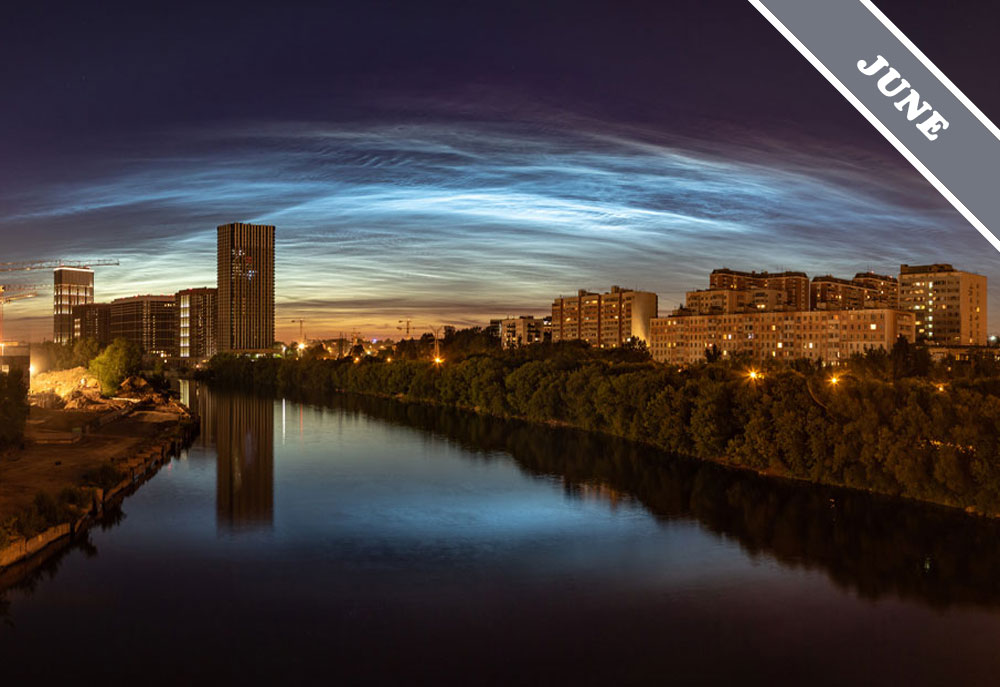 High in the upper atmosphere over the Moskva River, in the Fili region of Moscow, Russia, ghostly bluish ripples of noctilucent clouds are spotted by Dmitry Kolesnikov as they shine out against the night sky. There were many spottings of this extremely high cloud during the month of June this year. Noctilucent clouds form right up in the mesosphere, at around 85 km (53 miles), far higher than normal weather clouds. This means they still catch the sunlight for one to two hours after sunset or before sunrise, when the rest of the sky is dark. Noctilucent clouds form during the summer months because, counterintuitively, when the troposphere below is at its warmest, the mesosphere high above is at its coldest. They form over the polar regions, but are visible only below 70 degrees, where the nights still have enough darkness in the summer. Typically, formations of noctilucent clouds only extend far enough from the poles to be visible from 50 degrees latitude, but during particularly extensive displays they can be spotted right into the mid-latitudes. The displays in the Northern Hemisphere this June were seen as far south as San Francisco, US (38 degrees). While the clouds are know as ‘polar mesospheric clouds’ the spottings of them are coming in from further and further away from the poles as the years go by, suggesting that they might be responding to the changing global climate.

Since 2007, NASA’s AIM satellite has been mapping noctilucent clouds, and has found them to be extending over larger regions over successive summers. Scientists suspected that their increased appearance could be related to the warming of the lower atmosphere due to increasing greenhouse gases. By combining AIM’s data with 36 years of measurements from other satellite instruments, a correlation was found between the more frequent noctilucent clouds and the colder upper-atmosphere temperatures that result as a side effect of warming near the surface.

Noctilucent clouds, whose name comes from the Latin for “night-shining”, are made of ice crystals, which form around minuscules particles of dust. Quite how the water and dust get up into the mesosphere is not certain. It is, after all, an extremely dry region of the atmosphere, often described as having just one hundred millionth as much moisture as the air on the Sahara Desert. But it is also the coldest region of the atmosphere, with temperatures at around –150°C, or –240°F. As for the tiny particles onto which the noctilucent cloud ice crystals start to freeze, the AIM satellite data has shown that these are likely dust from meteors that burned up as they entered Earth’s atmosphere.

Keep an eye out for noctilucent clouds during the summer months in your hemisphere by looking for their delicate, blue ripples in the direction of the pole on clear nights. An hour or so after sunset or before sunrise are the best times. And if you spot some, why not report your sighting to our lofty friends at the Noctilucent Cloud Reporting Network?