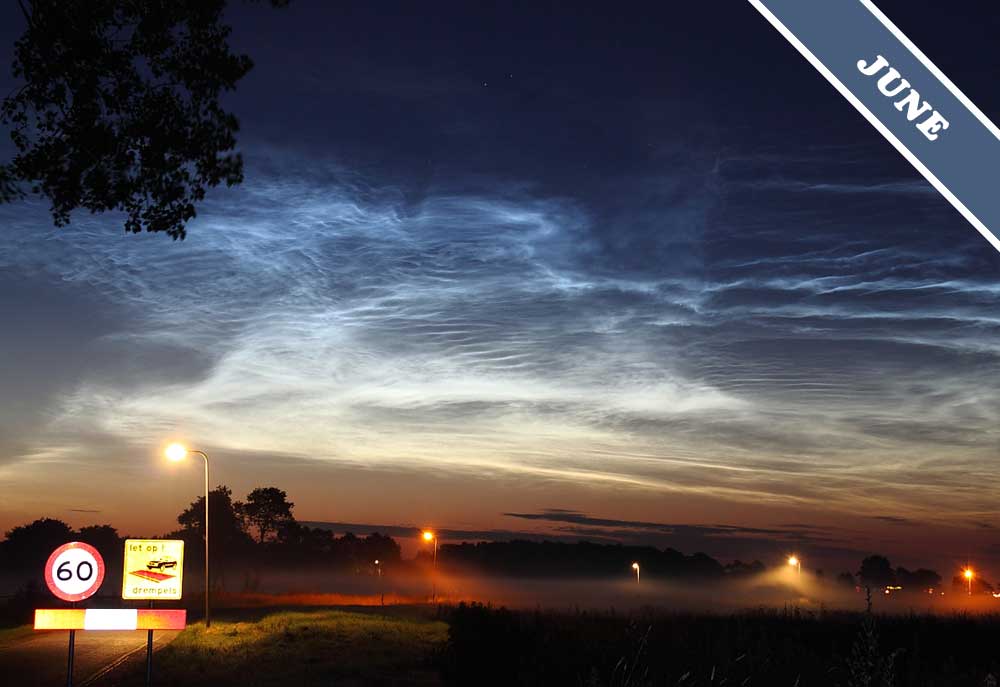 Time for Some Night Cloudspotting

Noctilucent clouds are extremely high clouds, which are only visible at night. Their name means ‘night-shining’ in Latin, and they shine out against the dark sky as eerie, bluish ripples. At altitudes of around 50 miles (80 km), they are by far the highest clouds in the sky. All the way up there, they still catch the light long after the sun has dipped below the horizon and the lower parts of the atmosphere are in shadow.

Also known as ‘polar mesospheric clouds’, these formations can be seen from the higher latitudes (between 50 and 70 degrees from the equator) during the two months in the middle of summer. For the Northern Hemisphere, around early June is the start of noctilucent-cloud-spotting season. If you are at a latitude higher than 50 degrees, look for these beautiful and mysterious clouds an hour or so after sunset or before sunrise. Of course, the lower sky needs to be clear for you to be able to see them.

Noctilucent clouds form in the ‘mesosphere’, which is a very cold and dry part of our atmosphere. Above the stratosphere, the mesosphere is too high for weather balloons to reach and to low for orbiting craft like the Space Shuttle and so it is a region we know relatively little about. As a result, noctilucent clouds are a bit of a mystery. No one knows for sure how their ice crystals form up there, where the air is one hundred million times dryer than that over the Sahara desert.

Photographed over Hoogeveen, the Netherlands, by AJ Hidding (Member 23,847)