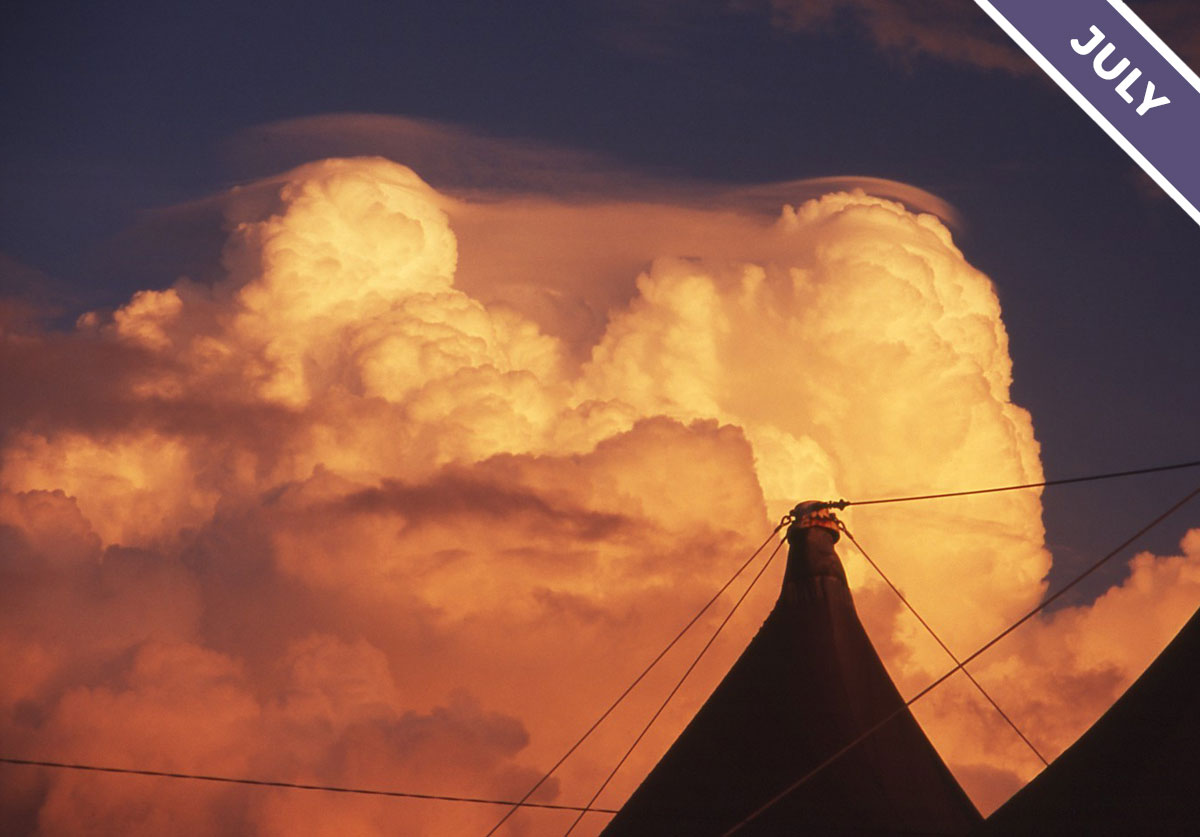 When Clouds Eat their Hats

A pileus is an accessory cloud that look like a hat perched on top of another cloud. The pileus formations here were spotted by Junichi Kai (Member 43,307) on the top of large Cumulus congestus clouds building over Fukuoka City, Japan. The powerful upward growth of Cumulus clouds like this, as they develop into larger storms, cause pileus to appear, and they explain why the delicate cloud caps are one of the most fleeting and short-lived of formations.

When a storm develops from a huge Cumulus cloud, known as Cumulus congestus, into the even mightier Cumulonimbus storm cloud it has powerful convection currents rising up within it. These massive columns of air are powered by the buoyancy that comes from the heat released into the air as cloud droplets condense and then start to freeze. The crisp cauliflower-like summits of the clouds here are these powerful convection currents made visible. And all that up-rushing air has an effect on the atmosphere just above the building cloud. It lifts up a layer of the air overhead, causing it to cool slightly as it rises. Most of the time, that lifting of the upper air and the resultant change in its temperature isn’t something that shows up. But when that air overhead contains just the right amount of moisture the cooling causes cloud droplets to form and appear as a cap over the rising cloud summits below.

The name pileus is Latin for a brimless hat worn by the Ancient Greeks and later the Romans which was made of felt. The clouds that bear the name do look smooth and soft compared to the solid, cauliflower-like tops of the building storms below. The difference in appearance between the two comes down to the different conditions of the air in which they form – the soft looking cap of pileus forming in a patch of air with not so much moisture in it that is blown upwards from beneath, the crisp, solid looking tops of the storm cloud forming in rising columns of moisture-laden thermals lifted from the surface and fuelled by the release of heat within.

A pileus rarely hangs around for long. This is because the cloud that forms it keeps on rising as it develops from a Cumulus congestus into a fully fledged Cumulonimbus storm cloud. The storm cloud eats its hat. It pushes up through the pileus, ingesting it into its upper reaches, and soon the fleeting feature named for the hat of the Greeks and Romans is cloud ancient history.