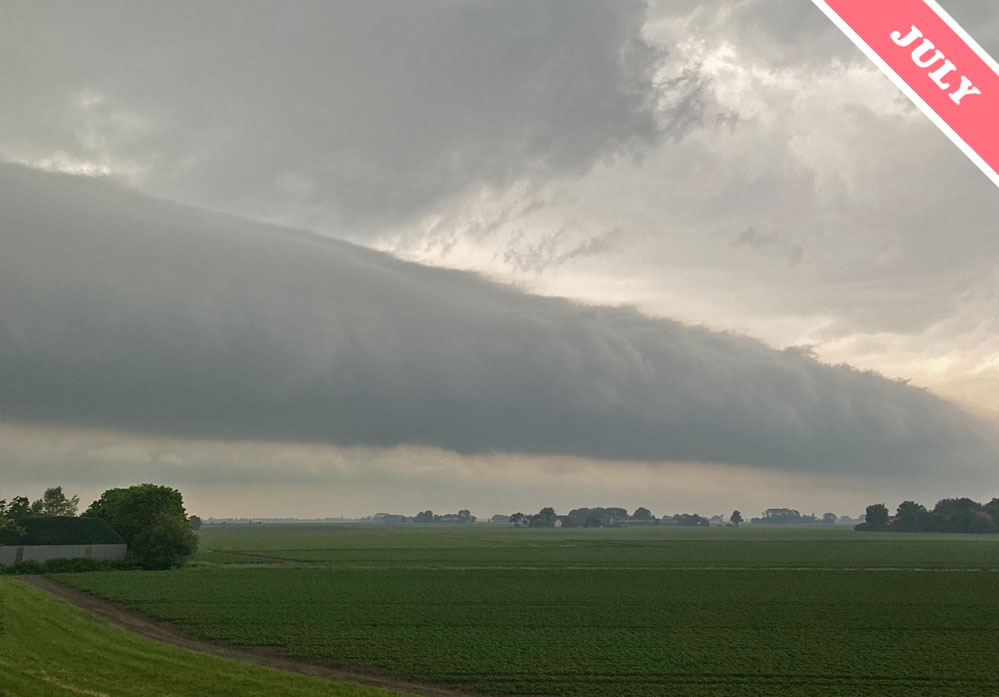 A Roll Cloud over the Netherlands

A roll cloud, which is also known by the more official classification volutus, is a long horizontal tube of cloud that travels low in the sky at speeds of up to 30 mph (50 km/h) within an invisible wave of air. What causes this rare and distinctive cloud formation to appear?

Well, it depends, because two very different situations can lead to roll clouds forming. Sometimes, they appear over the water in coastal regions when the weather is quite calm. This is when a roll cloud can develop in an otherwise clear sky, like the example below spotted by Jean Louis Drye off the coast of Sao Paulo, Brazil. At other times, they appear in stormy conditions like this Cloud of the Month for July spotted ahead of a thunderstorm by Eric Rietzschel (Member 34,494) over Westeremden, The Netherlands.

Why would the same low roll of cloud form in such contrasting conditions, and what would make it travel across the sky like volutus clouds tend to do? Though the general atmospheric conditions over calm coastal waters and ahead of storms are very different, the movements of air down near the surface of the land or ocean can be quite similar, and these are what cause volutus clouds to form.

Along coasts in sunny conditions, sea breezes flow inland during the day as the sun-warmed ground heats the air causing it to lift. In the evening and at night, land breezes flow the other way, out to sea, as the land cools beneath clear skies and air lifts instead over the warmer ocean. These evening land breezes can cause roll clouds. As it flows away from the land the cooler air of the land breezes encounter warmer, more moist air over the coastal waters. Being denser, the cold air burrows beneath the warm, causing it to lift along a line like an atmospheric version of that bore wave that can sometimes be seen advancing on the surface of the water of a river estuary with the arrival of a high tide. If conditions are right, the warm moist air cools enough as it lifts in this travelling wave of air to form cloud droplets, which appear as a long roll of cloud that sweeps gradually out to sea.

And what about the thunderstorm version of a roll cloud like July’s Cloud of the Month? This also forms as cool air burrows beneath warmer but this time no coastal breezes are required. That’s because the flow of cool air comes thanks to the storm. A Cumulonimbus storm cloud produces heavy localised showers, sometimes containing hail, and all the falling precipitation drags down with it cool air from on high. When it reaches the surface, this cool air splays outwards like milk dropped on the kitchen floor. The sultry conditions that gave rise to the Cumulonimbus storm in the first place mean the air down near the ground is warm and humid. So we end up with similar conditions to those of the coastal roll cloud: cool air flowing along the surface lifting warmer, moister air out ahead which cools to form a horizontal roll of cloud. This time, however, the roll cloud has a stormy sky behind it rather than a clear one.

Volutus is known as a roll cloud on account of its movement as much as its shape. Whether formed by land breezes or the outflow of a storm, the cloud rolls along within a travelling wave just ahead of the advancing flow of cool air near the surface. Watch a volutus over time, and you’ll notice the tube of cloud lifts at the front and sinks at the back as it progresses.

Volutus spotted by Eric Rietzschel (Member 34,494) over Westeremden, The Netherlands as a thunderstorm rumbled in the distance..