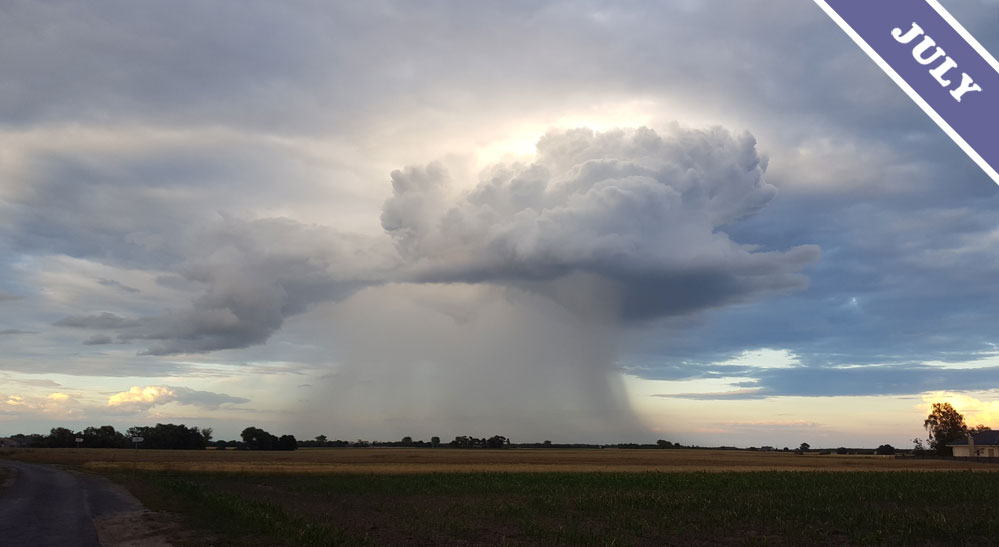 This Cumulonimbus cloud spotted by Armin Berke (Member 9,268) over Wielkopolska, Poland seems to be ignoring the imperative of social distancing. It has been overcome by the storm cloud equivalent of a sneeze, known as a ‘microburst’. This very localised and extremely intense downward current of air can shoot from the base of a Cumulonimbus storm cloud with little warning. The area covered by a microburst, which is often, though not always, accompanied by precipitation, is really small compared to the huge scale of storm systems that give rise to the likes of tornados. This very localised nature of microbursts make it difficult to know when one’s about to happen nearby. And that matters, because aircraft most definitely need to keep their distance from these intense downdrafts of air.

The sinking torrent of air within a microburst splays out in all directions as it reaches the ground. This means that any plane unlucky enough to be taking off or coming in to land when a microburst develops in its path will first experience strong lift as wind blows towards it, and then will experience intense sink as it passes through the downdraft and out the other side, when the wind is now suddenly blowing from behind. The intense wind conditions are very hazardous. In response to historic crashes resulting from microbursts, studies into their formation have led to warning systems being installed at major airports. These can help predict microburst near the runways and spot them as they occur, giving pilots time to take evasive action and avoid them.

What causes a Cumulonimbus storm cloud to produce a microburst? And why would the intense downdraft of air sometimes happen without any rain even reaching the ground? Microbursts seem to occur when a storm cloud has quite a high base and a layer of relatively dry air is just beneath it. This drier air has an effect on the ice crystals or raindrops falling from the base of the cloud. Precipitation falling from any storm cloud will tend to drag the air down with it, causing a downdraft, but in the case of a microburst the sinking air is given an extra boost by the effect of the drier air below. It causes ice crystals to melt rapidly, or ice and raindrops to evaporate away completely. This melting or evaporating cools the air rapidly. It’s just what happens whenever water changes from solid to liquid to gas: it cools. And as the surrounding air cools it becomes more dense and sinks faster, increasing the strength of the downdraft. Perhaps the precipitation evaporates away completely to appear as tendril-like streaks known as virga, or perhaps it lands as rain. Either way, the resulting microburst is an intense, localised cloud hazard that is definitely not to be sneezed at.