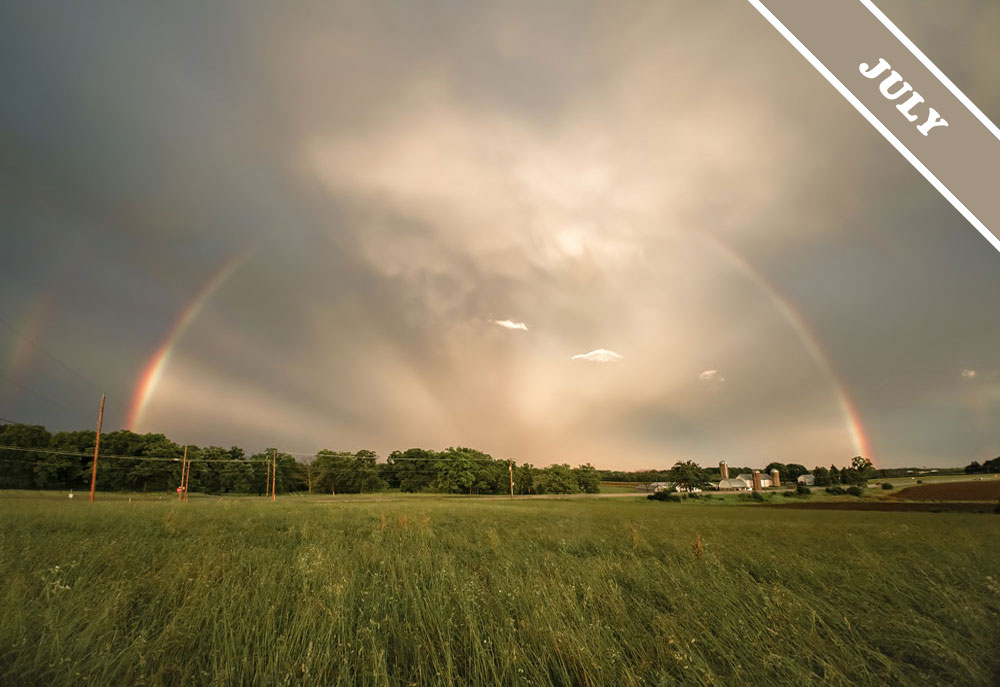 You’ll have to be lucky to see a rainbow wheel. The dramatic optical phenomenon depends on the chance combination of two independent light effects: a rainbow and the beams of light and shade known as anti-crepuscular rays. The effect of the two is reminiscent of a wheel because the rays always appear to be fanned around the arc of the rainbow as if emerging from its centre like the spokes of a wagon wheel. But this appearance, as is so often the case with atmospheric optical effects, is not quite what it seems.

Crepuscular rays appear when cloud shadows are rendered visible by the scattering of light by atmospheric haze. They are known as anti-crepuscular rays when these shadows reach right across the sky, cast perhaps from tall clouds on the horizon in front of a low sun. This rainbow wheel view, spotted around sunset over Waterford, Wisconsin, US by Terry Alby (Member 40,752), was viewed looking towards the opposite horizon from that of the Sun. The shadows came from clouds way behind Terry when he took the shot. The beams of light and shadow are in fact parallel. They just appear to converge due to the effect of perspective. And this turns out to be the reason the spokes of a rainbow wheel always align perfectly around the rainbow’s rim.

Anti-crepuscular rays appear to recede due to perspective towards a spot known as the ‘anti-solar point’. This is in the exact opposite direction from that of the Sun. And the laws of optics decree that rainbows are always centred on the very same anti-solar point. This is why a rainbow appears lower on the horizon when the Sun is higher in the sky. It is also why, whatever the Sun’s elevation, anyone fortunate enough to spot a rainbow at the same time as a whole bunch of anti-crepuscular rays will always find them perfectly aligned, as if to form a lucky wagon wheel of the sky.

A rainbow wheel spotted in a storm shower at sunset over Waterford, Wisconsin, US by Terry Alby (Member 40,752).[/vc_column_text][/vc_column][/vc_row]