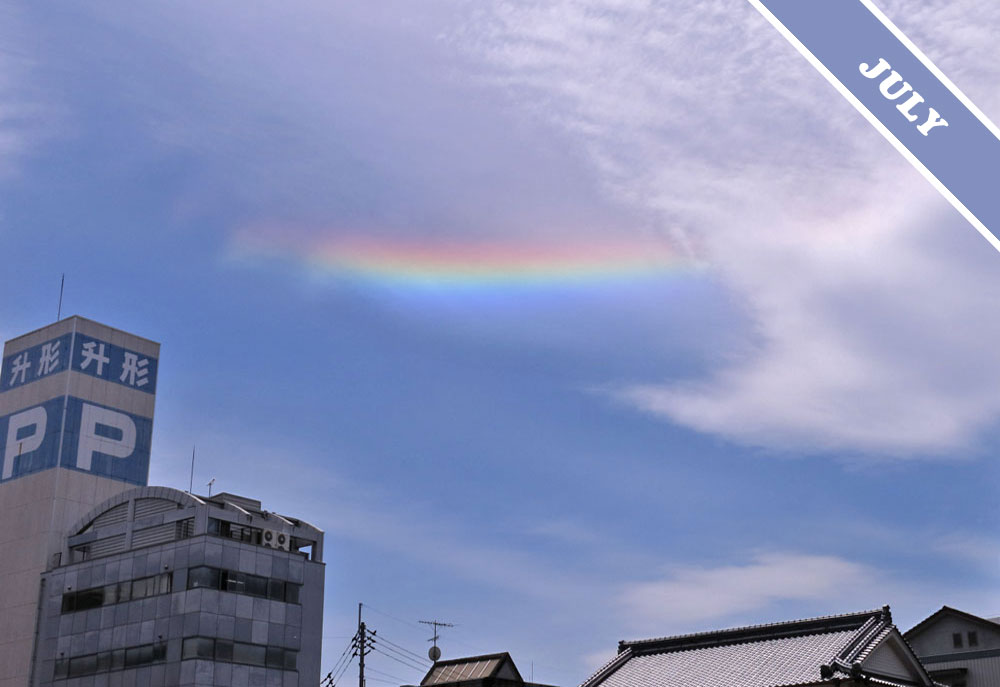 The circumhorizon arc is an optical effect caused by the sunlight shining through the ice crystals of high clouds. It is one of the many rings, arcs and points of light known as ‘halo phenomena’, which appear when a high cloud’s ice crystals take the form of regular hexagonal plates or columns that reflect and refract the sunlight like tiny prisms.

The circumhorizon arc appears as a broad, flat line of bright colours, parallel to the horizon and positioned well below the Sun – at least twice the span from thumb to little finger of your outstretched hand, held at arm’s length. The distortion of camera lenses can make a circumhorizon arc look slightly curved in photographs, but in real life it is completely straight. Since the light passes in through side faces of the hexagonal plate crystals and out through the bases, this particular optical effect can only occur when the Sun is high in the sky – more than 58 degrees above the horizon, to be precise. Only then can the light pass through the crystals at the necessary angles.

The rarity of the circumhorizon arc depends on where you’re based. The lower the latitude, the greater your chance of spotting a circumhorizon arc when Cirrus or Cirrostratus clouds are in the sky. Les Cowley, Member (0014), reports in his Atmospheric Optics site that from most locations in the US they can be observed about five times a year, but from locations in northern Europe you might see them only once or twice. Likewise, they’re more commonly seen in Australia than in New Zealand. You’ll never see a circumhorizon arc, however, from latitudes above 56 degrees – in the Northern Hemisphere, that’s anywhere north of Copenhagen, Denmark – since the Sun never climbs high enough in the sky.

Nor is it possible, unless you’re near the equator, to see a circumhorizon arc throughout the year. For most of us, the dependance of this vibrant optical effect on a such high Sun means that its horizontal streak of pure, spectral colour will only ever grace our skies during the summertime.