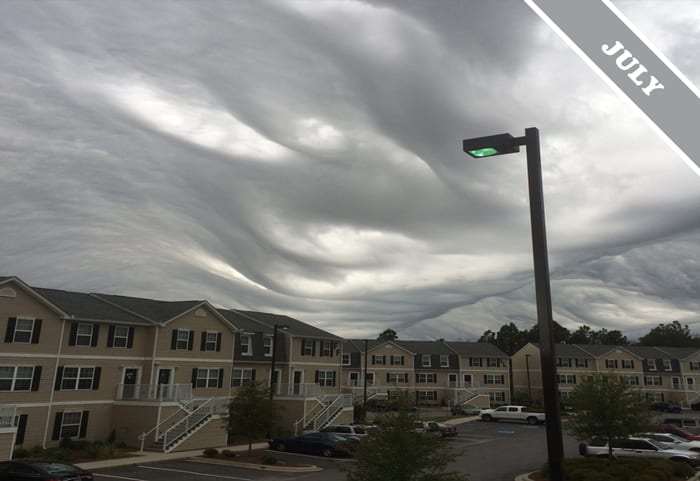 For July’s Cloud of the Month, we’ve chosen a formation that was accepted as a new type of cloud a few weeks ago at the World Meteorological Organisation’s 17th Congress. It is now known as ‘asperitas’, after the Latin for ‘roughness’, it’s the first new cloud type since 1951, and it was identified thanks to photographs sent in by our members – like this one by Sarah K. Davis over Statesboro, in Georgia, US.

Back in 2006, we received some photographs of a strange cloud over Iowa, US. The formation didn’t seem to fit within the existing cloud classifications. It looked like rough, turbulent and contorted waves. We weren’t sure what to call these clouds when we added them up on our photo gallery. There is already a term for wavy clouds, they’re called undulatus, but these turbulent waves seemed different from the usual undulatus. And those 2006 examples weren’t the only ones. We soon noticed other examples. These same dramatic wave clouds were being sent in from other parts of the world. Each time, we thought there’s another of those weird, nameless clouds.

Eventually, we decided that if these clouds didn’t have a name, perhaps they should have one. Perhaps they needed a classification of their own. So in 2008, we proposed calling them ‘asperatus’, which means ‘roughened’. The name has since been tweaked to asperitas by the World Meteorological Organisation (WMO) because they’re incorporating the term into the part of the naming system that uses Latin nouns.

A cloud type is only official when it appears in the WMO’s International Cloud Atlas. The new edition of this international reference work for cloud geeks is scheduled to come out in the beginning of 2016 and asperitas is due to be included. So the WMO have asked us to help provide a photograph of the new cloud type for the book. This is why we have launched a competition to find the best photograph of asperitas to appear in the International Cloud Atlas as the reference image against which all asperitas spottings will be judged. We’ll announce the winner at the Cloud Appreciation Society Conference in London on 26 September 2015.