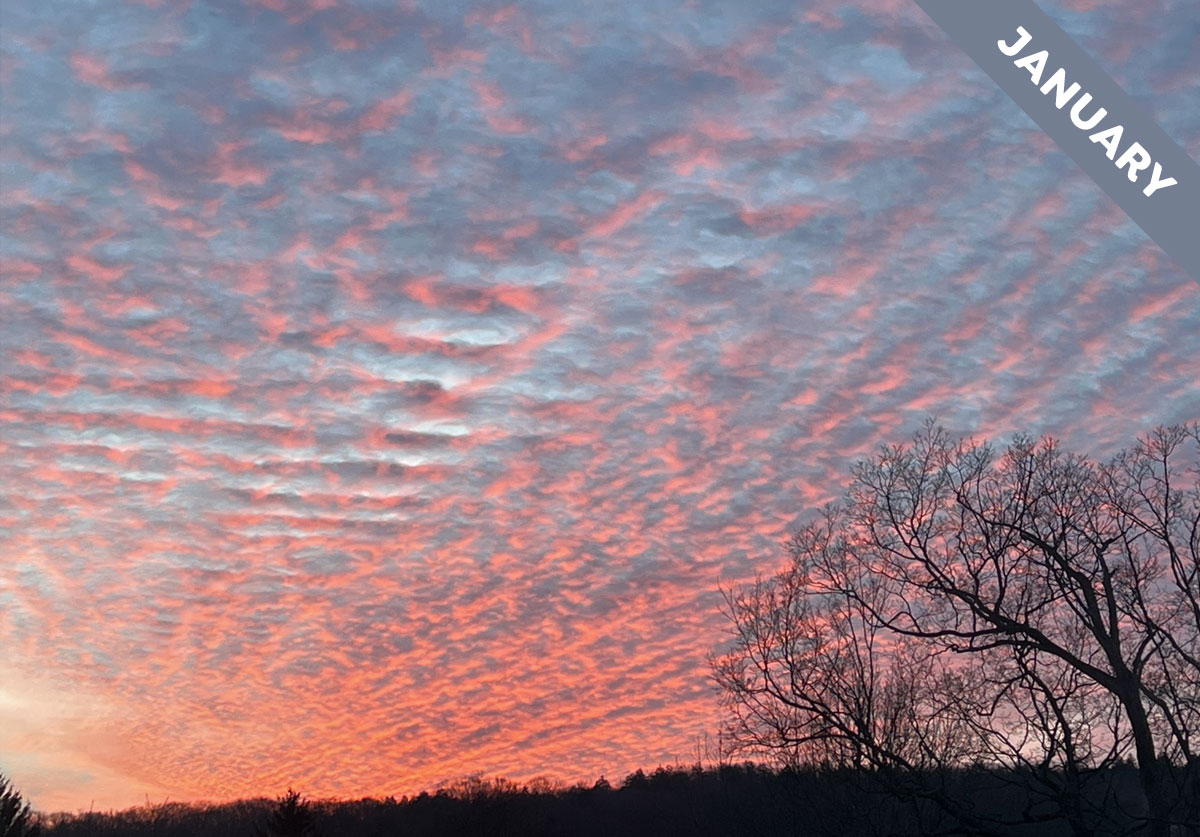 Criss-crossed Clouds at the Dawn of a New Year

Cloud of the Month for January is a form of Altocumulus that reveals beautifully how the air in our lower atmosphere can flow in different directions at different levels. We call a cloud Altocumulus when it has a solid appearance and is in the mid-level of the troposphere*, the part of our atmosphere where weather happens. Clouds up at this level often appear in regular patterns of ‘cloudlets’ spread right across the sky. The arrangement of these cloudlets can reveal to cloudspotters below the nature of the invisible air flows high up at the level of the cloud – and never more so than when an Altocumulus, like this one spotted by Pamela Crimmins (Member 48,931) over Winsted, Connecticut, US, is arranged into lots of parallel ridges aligned this way and that.

Pamela’s Altocumulus cloud, which she spotted at sunrise, is of the form called undulatus. We use this term when lots of parallel ridges appear in a layer of cloud – be it a smooth, continuous layer or one made up of separated cloudlets like this. This cloud looks like those ridges of sand on a sandy beach that you can feel beneath your feet as you walk at the water’s edge. An Altocumulus undulatus cloud tells us about the wind patterns aloft. It shows that the winds up around the cloud level are ‘shearing’ – that the wind’s speed or direction is significantly different just above the cloud than it is just below the cloud. This abrupt change in wind-flow with altitude causes the air where the cloud is in between to rise and dip, rather like a rug ruffling up when you slide it along a smooth floor. And this rising and dipping of the airflow has an effect on the appearance of the cloud. Any cloud is likely to thicken when the air is rising (and cooling) and to thin out or dissipate completely where air is sinking (and warming). The shearing winds therefore give rise to the distinctive undulatus pattern of ridges, and they are aligned perpendicular to the direction of the wind up at the cloud level.

But there’s something unusual about Pamela’s Altocumulus undulatus cloud. Its ridges are going in two different directions. This is because the cloud has formed in two distinct layers – both in the mid-level of the troposphere but at slightly different altitudes – and these layers have undulatus ridges running at different angles. A cloud that appears in distinct levels like this is known by the term duplicatus. So if we wanted to be super-geeky about Pamela’s cloud we’d call it Altocumulus undulatus duplicatus. The formation shows us that the winds at the lower layer of cloud were flowing diagonally across the scene, likely from the bottom right to the top left of her photo, while those at the higher layer cloud were flowing straight overhead, likely from the bottom of her photo to the top.

Criss-crossed formations like the Altocumulus undulatus duplicatus cloud Pamela spotted on this winter sunrise exist to remind us how the appearance of clouds can reveal the ever-shifting winds that flow in layers through the vault of the lower atmosphere.

*Mid-level clouds might be at altitudes of around 2–7 km (6,500–23,000 ft), but it depends on the time of year and the location – the range is lower near the Poles and higher near the Tropics.