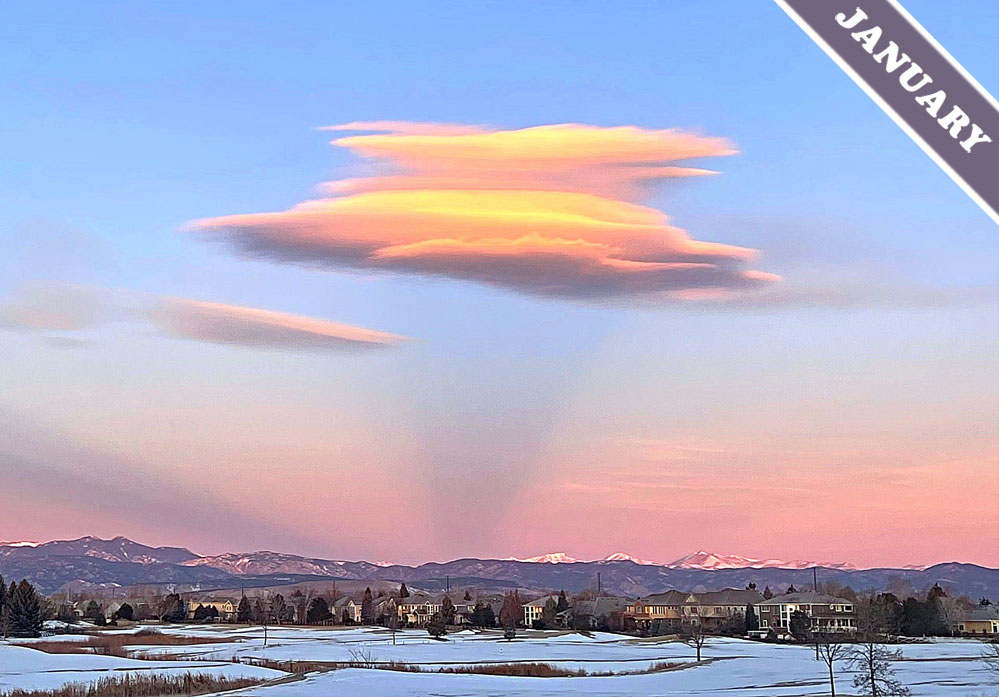 ‘Beam me up, Lennie’

Disc-shaped clouds like this are known as lenticularis clouds. They are named with the Latin word for a ‘lentil’, and they often tend to look like flying saucers. They are known affectionately as lennies by glider pilots who use them to reveal where air flows are rising and therefore promising the all-important lift on which their flight depends. They form at the crests of waves of flowing air downwind of raised terrain like mountains or hills. The winds lift to pass over the peaks before dipping back down again and, in atmospherically stable conditions, this invisible rising and dipping flow can extend up through the atmosphere. If there’s enough moisture in the air it can condense into droplets as the air cools at the crests of the waves, and we see these as smooth disc- or lozenge-shaped lenticularis clouds.

This lenticularis cloud was spotted over the Rocky Mountains of Colorado, US by Patrick Dennis (Member 43,666). Since it is up at the mid-level of the troposphere (the part of the atmosphere where weather happens) we would also refer to it as an Altocumulus cloud, so its full name would be Altocumulus lenticularis. And this particular flying-saucer cloud seems to be sending a tractor beam to the mountains below.

The beam is in fact a shadow cast by the lenticularis cloud. The Sun was shining from behind Patrick as he took the photograph looking west not long after sunrise. A slight haze in the morning air was scattering the sunlight, rendering visible the regions of light and shade. The shadow looks like a beam because it is receding away and so appears to converge on a point over the horizon. The light rays, which are actually as good as parallel, appear to converge like this due to the effect of perspective. The official name for cloud shadows cast across the sky away from the Sun like this is ‘anti-crepuscular rays’.

At the Cloud Appreciation Society, we think of all clouds as vehicles for the imagination. They help lift our perspectives from the concerns of terra firma. And the flying-saucer shaped lenticularis clouds are the interplanetary crafts of the cloud world. They hang in the air, hovering in place even in brisk winds, ready for when they’re needed to beam us up and carry us away.

Altocumulus lenticularis and anti-crepuscular rays spotted over the Rocky Mountains of Colorado, US by Patrick Dennis (Member 43,666).