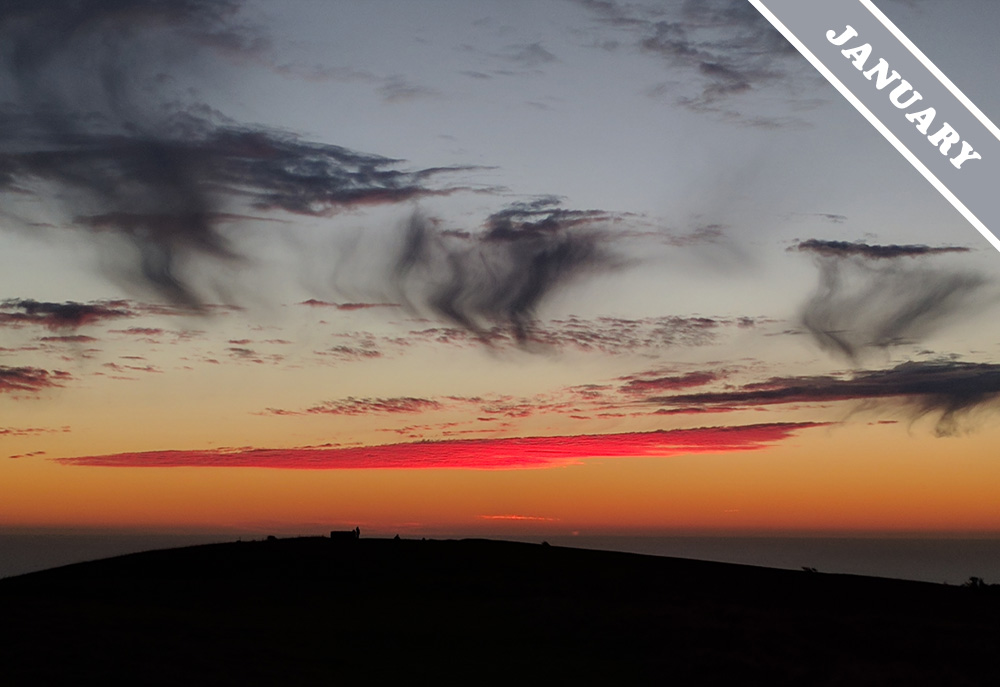 These tendrils of cloud, hanging from patches of Altocumulus at sunset over the south coast of England, are known as ‘virga’. They are an example of what cloud geeks refer to as ‘supplementary features’ – distinctive details found attached to, or near to, one of the main cloud types. Virga are when a cloud produces a trail of precipitation that evaporates away as it falls through the warmer, drier air below. As such, they are the visible expression of what makes water unique.

Water is the only substance readily found in solid, liquid and gas states within the natural temperatures of our planet. And the ease with which it changes from one state to another gives clouds their magical quality. It is why they seem to appear and disappear at will.

We can see droplets of liquid water and ice crystals of solid water when they are suspended in the air. They scatter the light and so appear to us as a cloud. But the gas form of water, known as water vapour, is transparent. It is when water is in the form of individual molecules, each far too small to see. And when liquid or solid water is warmed, it can change into the invisible gas, water vapour. One minute it’s there, the next minute it’s gone. Which is exactly what is happening with January’s Cloud of the Month.

Cloud droplets towards the top of the patches of Altocumulus have cooled enough to start to freeze into ice crystals. These grow in size and begin to fall below in a trail of precipitation. As they descend, they pass through warmer, drier air below. This causes them to melt back into droplets and then evaporate into water vapour. Sometimes, ice crystals miss out the liquid stage and change straight into gas form. Either way, the streaks of virga dissipate. Like a shower that could have been. A downpour that never was. They just vanish into thin, evening air.

We invited Katharine Towers, poet in residence at the Cloud Appreciation Society, to write a poem inspired by January’s Cloud of the Month. Here she introduces the fifth of her Cloud Studies:

“In this short poem, the cloud speaks to the earth as if it/she were a lover. The cloud itself is a world-weary figure, which probably emerged from the idea that clouds can’t ever rest or sleep. I was no doubt also recalling Constable who described clouds as ‘the chief organ of sentiment’ in a painting. This led me to the idea that it might be in some way a burden to carry all that baggage. I can’t account for the appearance of the piano, unless it is something to do with the appearance of a grand piano and a cumulonimbus. The notion of a downpour that doesn’t actually materialise seemed to provide a satisfying exit. To add insult to injury, the cloud can’t even do the one thing that might provide some relief (ie rain).”

Darling, can I sleep?
All day I have been marvellous –
like a struck piano.
I have softened the blows.
I have felt deeply and with no relief.
I have imagined rain soaking
your long chalk hills.
Poor old instrument that I am,
lugging ever after
a downpour that never was.