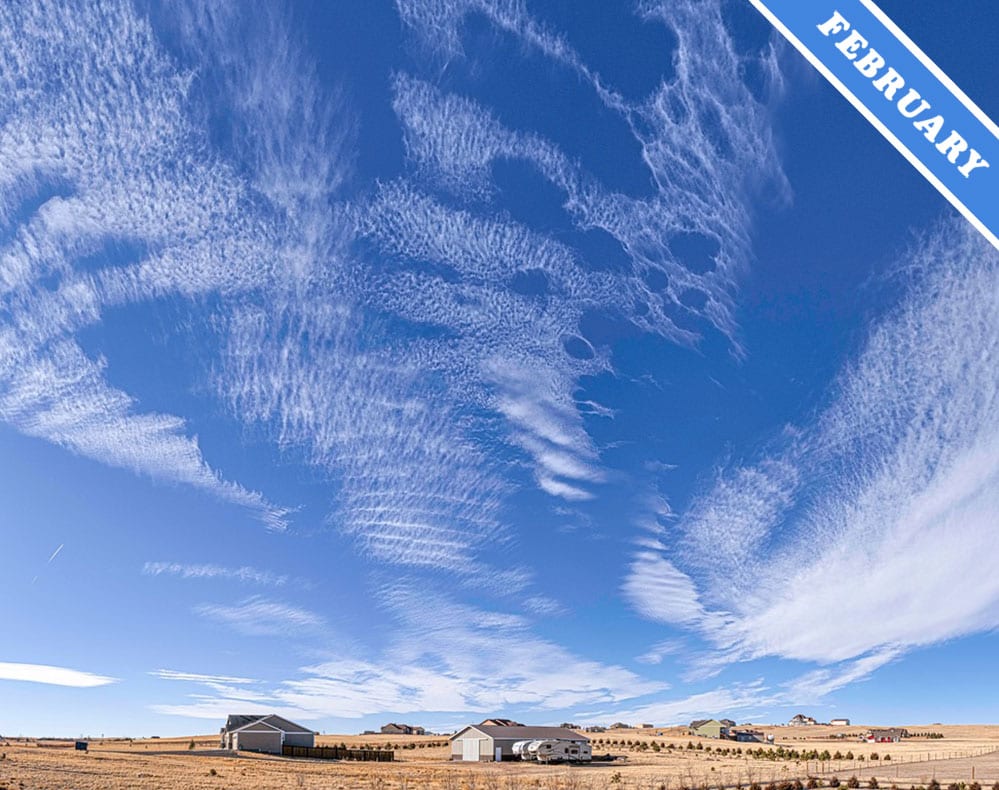 High patches of cloud made up of lots and lots of tiny clumps are known as Cirrocumulus, and that’s the main cloud type in this big sky spotted by Jan Curtis over Cheyenne, Wyoming, US. Cirrocumulus is most fleeting of the ten main cloud types because it consists of extremely cold ‘supercooled’ droplets, which soon freeze into ice crystals up at the cloud’s frigid altitudes. Once the droplets have frozen the Cirrocumulus will have changed into one of its ice-cloud cousins, Cirrus or Cirrostratus.

Also short-lived is the fleeting pattern of cloud perforations known as lacunosus. The Latin word means ‘full of holes’, and refers to the regions of the Cirrocumulus that are arranged into a lacy net, caused by pockets of sinking air. In the sky spotted here by Jan there are much larger holes too, where the delicate weave of lacunosus seems to have become tattered and worn. These larger holes are called cavum cloud features, also known as fallstreak holes. They’re where the supercooled droplets of the Cirrocumulus froze into ice crystals that fell below and then evaporated away in the drier, warmer air beneath. Whenever this happens in a Cirrocumulus, the freezing process spreads outward in a chain reaction because the supercooled droplets around the growing ice crystals soon freeze too. This means the fallstreak holes can grow to well over 100 miles (160 km) across.

Other distinctive features of this cloudscape are the broad patterns of parallel ridges. These are referred to as undulatus. They are aligned perpendicular to the flow of winds up at cloud level, and they result from a ‘shearing’ arrangement of the winds. This is when they flow much faster above the cloud than below it. Shearing winds can result in a rising and dipping of the air in between. Cloud is encouraged in the rising parts and suppressed in the sinking, and so a distinctive pattern of parallel ridges emerges. Cirrocumulus undulatus is traditionally referred to as a mackerel sky because these bands of tiny cloud clumps resemble the barred markings on the scales of the sea fish.

If the full classification of ‘Cirrocumulus lacunosus undulatus with cavum’ feels too big even for this vast Wyoming sky then let’s keep it simple and instead just call it a mackerel sky full of holes.

Cirrocumulus lacunosus undulatus with cavum spotted over Cheyenne, Wyoming, US by Jan Curtis.