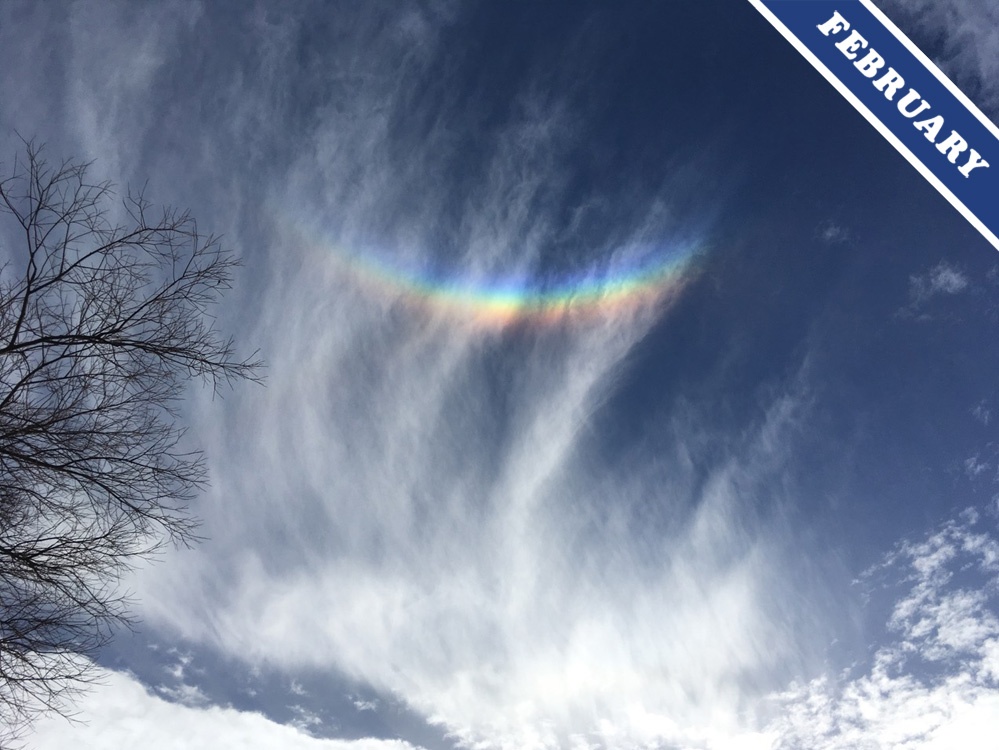 A Smile in the Sky

As we say in our manifesto, clouds are the expressions on the face of the atmosphere. They reveal its moods, and they can be read like the expressions on a person’s countenance. While the light effect known as a ‘circumzenithal arc’ won’t tell you much about the weather in store, it has to be the happiest of all the cloud optical phenomena.

The colours of this smile in the sky are brighter and purer than those of a rainbow. They are caused by the sunlight shining not through water droplets but ice crystals, like the ones spotted here over Bellingham, Washington, US by Paula Reed (Member 35,934). The crystals are not up at the level of Cirrus clouds, but in a mid-level cloud phenomenon known as a cavum, or fallstreak hole. The formation is hard to see in the main image, but more obvious in the photo below that Paula took a little while after.[/vc_column_text][/vc_column][/vc_row][vc_row row_type=”row” use_row_as_full_screen_section=”no” type=”full_width” text_align=”left” background_animation=”none” css_animation=””][vc_column width=”1/2″][vc_column_text]A cavum cloud appears when a layer like this Altocumulus is composed of extremely cold droplets that start to freeze in one region. Often the freezing of these ‘supercooled’ water droplets is initiated by an aircraft climbing or descending through the layer. The ice crystals that form soon grow large enough to fall below, leaving behind a hole in the cloud layer above. Ice crystals that form in this way often produce bright optical phenomena like the circumzenithal arc shown here. They must grow at just the right rate to develop into the simple, hexagonal plate shapes needed to act as tiny prisms, which reflect and refract the sunlight in the right way.[/vc_column_text][/vc_column][vc_column width=”1/2″][vc_single_image image=”330118″ img_size=”large” qode_css_animation=””][vc_empty_space height=”20″][vc_column_text]

The ice crystals that caused the circumzenithal arc were from a cavum, or fallstreak hole, like this one that Paula Reid photographed shortly afterwards.

[/vc_column_text][/vc_column][/vc_row][vc_row row_type=”row” use_row_as_full_screen_section=”no” type=”full_width” text_align=”left” background_animation=”none” css_animation=””][vc_column][vc_column_text]We think circumzenithal arcs are the most beautiful of all the cloud optical effects. You may wonder, therefore, why they are not as well-known as rainbows. The reason is simple. That they appear very high in the sky – up towards the zenith, which is straight up above you. Most people just don’t tend to look that high up. Cloudspotters, we are pleased to say, aren’t like most people.

A circumzenithal arc in the ice crystals of a cavum, or fallstreak hole, spotted over Bellingham, Washington, US by Paula Reed (Member 35,934).[/vc_column_text][/vc_column][/vc_row]