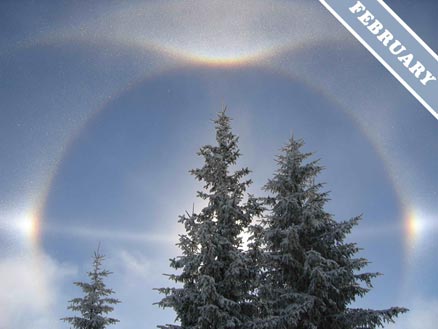 There are many coloured arcs and rings, known as ‘halo phenomena’, which can appear as the sunlight passes through tiny ice crystals in the sky. Over many parts of the world, these optical effects are most commonly seen through high clouds such as Cirrostratus or Cirrus. But the most dramatic displays of halo phenomena are often when the ice crystals are in the form of a ground-level cloud known as ‘diamond dust’. This is what produced the beautiful light display shown above.

Diamond dust is so named because of the way it sparkles in the sunlight. It is rather like mist, but consists of ice crystals rather than water droplets. When crystals form near ground level like this, they can grow more slowly than they do in clouds high in the sky. This can make them very pure from an optical point of view – clear like glass, rather than cloudy like ice cubes. If they also happen to form in the right shapes, the crystals in diamond dust can behave like countless microscopic prisms. These are what diffract and reflect the sunlight to form halo effects.

There are a whole range of possible arcs, circles and points of light that can appear. The fantastic display shown here, over Saalbach, in Austria, exhibits no less than five halo phenomena. The circle around the sun is called a ’22˚ halo’, while the points of light on either side of it are known as ‘sun dogs’, or ‘parhelia’. The line joining these with the sun (which hidden behind the trees) is called the ‘parhelic circle’. Finally, the arc appearing at the top of the image, just kissing the 22˚ halo, is known as an ‘upper tangent arc’.

Those seeking a fuller understanding of the different halo phenomena and how they form, should make haste to www.atoptics.co.uk. It is a fantastically informative site produced by Les Cowley, who is of course an Honorary Member of the Cloud Appreciation Society.


From a photograph alone, it can be hard to see whether optical effects like these are caused by ice crystals near to the ground or very high in the sky. Our first thought on seeing this image was that they were caused by a thin layer of Cirrostratus. Only on closer inspection did we notice the sparkles, and realise that diamond dust was responsible.