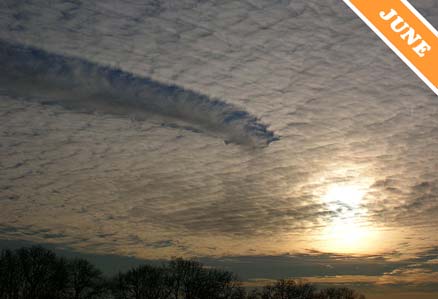 (Click image to enlarge)
Photographed over Hampshire, UK © John Norris (see it in the gallery)

We’ve all observed the worrying proliferation of condensation trails, or ‘contrails’, criss-crossing our skies in the wake of high-altitude aircraft. They look like man-made scars across the blue. But how many have noticed the much less common but related cloud effect, known as a ‘distrail’?

Short for ‘dissipation trail’, this is not so much a cloud, as a gap in cloud cover. It can appear when an aircraft happens to pass through a fairly thin cloud layer composed of ‘supercooled’ droplets. These are in unfrozen, liquid form, even though temperatures are well below 0degC. Water droplets can stubbornly refuse to freeze when there is a lack of air-borne particles to act as nuclei onto which the ice crystals can start forming.

As an aircraft climbs or descends through one of these supercooled clouds, the turbulence of its wake and the many minute particles contained in its exhaust encourage the cloud’s droplets to freeze. This happens when some of the particles act as the nuclei onto which the droplets can start freezing. As the crystals form, they grow in size and fall below. Left behind, is a just gap in the cloud – the distrail.