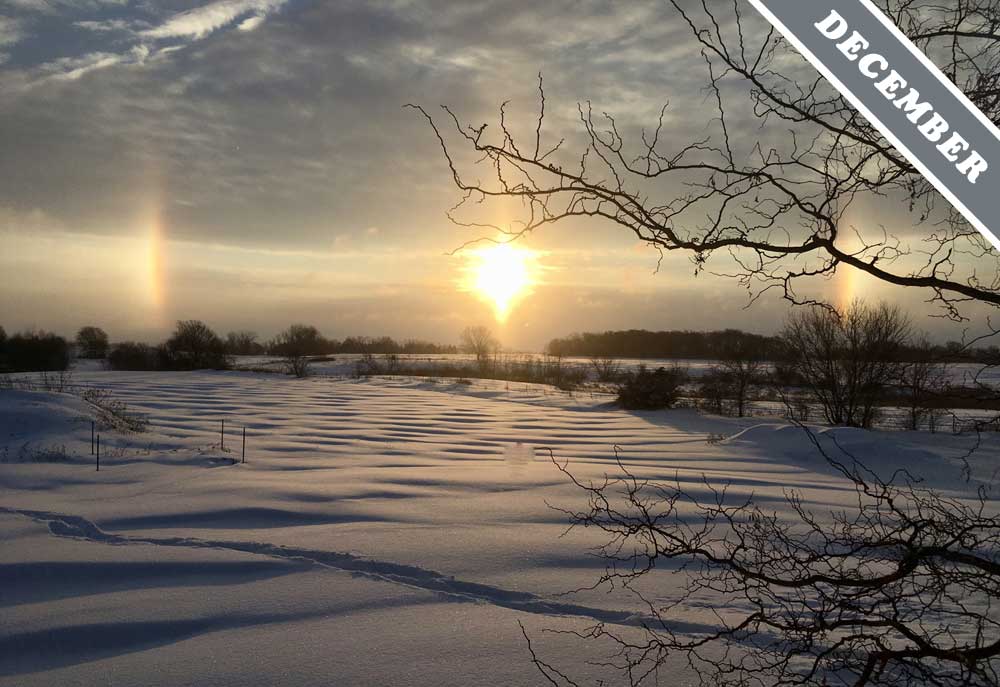 Sun dogs are patches of light that can appear off to one or both sides of a low sun. They often have reddish edges on the side towards the Sun, and sometimes show other colouration. Sun dogs are one of the many ‘halo phenomena’ that can result from the sunlight shining through ice crystals in the atmosphere. But while this winter scene in Minnesota, US looks festive, the presence of sun dogs in the sky reveals that the ice crystals here are nothing like the intricate ‘stellar dendrite’ style of ice crystal that is always represented in Christmas decorations.

The ice crystal shapes that produce most halo phenomena are far simpler. The ones that give riser to sun dogs are just regular little hexagonal plates of ice. They’re the plain Janes of the ice-crystal world. And though they don’t live up to that stereotype of each crystal being unique, the simplicity gives these ice crystals a magical power. It means they act as minuscule prisms through which the sunlight can shine, and they refract, or bend, the light’s path as they do so. You don’t get halo effects like sun dogs from the crowd-pleasing stellar dendrite ice-crystal.

These sun dogs were spotted by David Richards (Member 47,917) over the appropriately named Lake Crystal in Minnesota, where they appear to have been caused from ice suspended not up in the clouds but right down near the ground. They’re likely produced by the subtle, glittering ice fog known as ‘diamond dust’. This can have crystals with just the right sort of simple regular shapes when it forms in conditions that are extremely cold and very dry. You can tell the optical effect is due to low ice crystals here by the fact that the bright patches of light extend upwards and downwards independent of the features and thickness of the cloud cover on the horizon. These sun dogs have come to visit thanks to the subtle, glittering fall of diamond dust through the still, freezing air of daybreak.