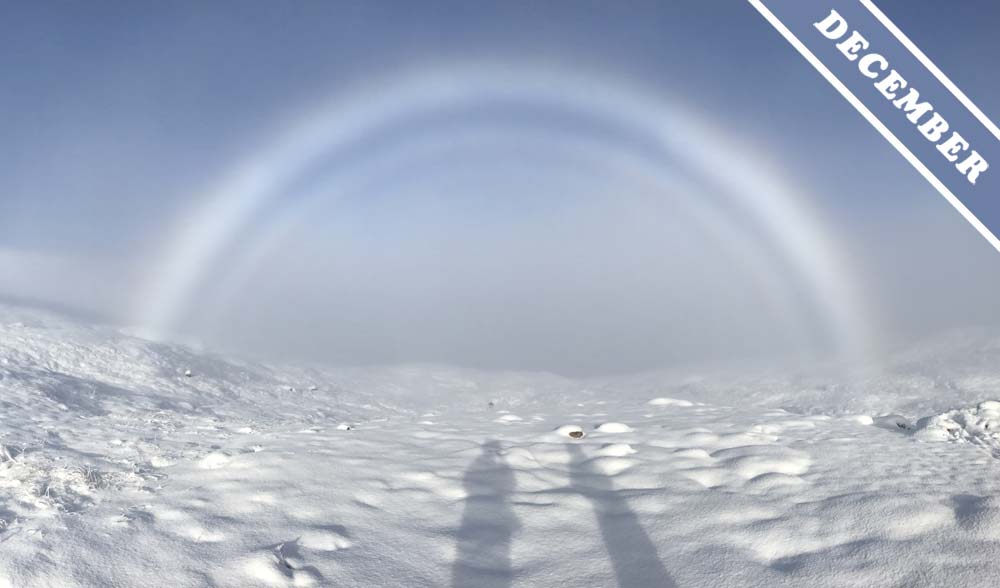 The Ghost of Rainbows Past

White, pure, etherial. A ‘fogbow’ is like a ghostly version of a rainbow. It forms in the same circumstances as a rainbow, with the sunlight shining from directly behind the observer, but with one exception: the light is shining onto a layer of fog rather than a sheet of rain.

And it is the size of the fog droplets that explains the lack of colours. While fogbows can have pale colours, they appear completely white when the droplets are much, much smaller than raindrops; perhaps just 1/100th of a mm across, compared with the 1 or 2mm of a typical raindrop. Really small fog droplets are closer in size to the wavelengths of visible light, and this means they don’t separate the colours as distinctly as larger raindrops do. The colours in a fogbow are blurred together due to the light being ‘diffracted’ by the tiny droplets. Whenever the different wavelengths of visible light are mixed together they appear white to us, and this is what gives the the fogbow its colourless appearance.

What unfinished business could prompt a rainbow to return to its former haunts as a ghostly fogbow? Perhaps just the urge to remind us of the beauty of our atmosphere.

A fogbow at the top of the Devil’s Staircase on the West Highland Way, Scotland © Simon Waddell.

We invited Katharine Towers, poet in residence at the Cloud Appreciation Society, to write a poem inspired by December’s Cloud of the Month. This is the fourth in her series of Cloud Studies, along a few words of her commentary:

“Having only recently written a poem about a coloured rainbow, I inevitably found myself thinking about the white version in the context of its more vivid counterpart. But I wanted to try and explore the ways in which a fogbow could be more beautiful and beguiling than the multi-coloured version we’re so familiar with. What might be the qualities that would attract and fascinate the onlooker? And, of course, I couldn’t keep out the wider (eg Biblical) meanings of conventional rainbows and their place in our traditions and superstitions.”

In which she explains
Fogbow

because you place your trust in thin air
because only a ghost can be perfect
because when I come back, you’ll not be there