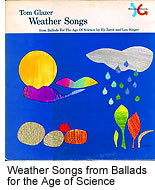 At last – something to listen to as you discuss the finer points of cloud formation with the rest of the family.

Our middle-aged American members may remember a series of educational children’s songs dating from the late 1950s called Ballads for the Age of Science by Lou Singer and Hy Zaret. Zaret is best known as the co-author of the 1955 hit Unchained Melody, one of the most recorded songs of the 20th century.

The six-album set included one of weather songs featuring such gems as How Clouds are Formed, Stratus and Cumulus, and Where is the Stratosphere? Here is a flavour of the lyrics, sung to a folksy guitar accompaniment:

The records were quite successful and the song Why Does the Sun Shine? (aka The Sun is a Mass of Incandescent Gas) was even covered by quirky alt-rockers They Might Be Giants in 1994.

An American called Jef Poskanzer has thoughtfully uploaded the songs as MP3 files onto his website and you can listen to them here. Our thanks to Jeff Waddell for telling us where to find them.