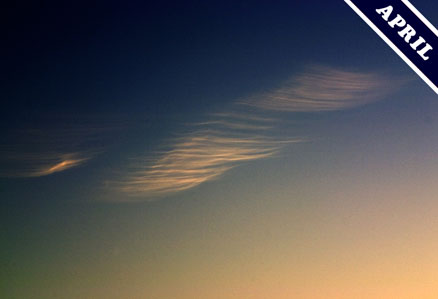 Some clouds are the type to make a fuss – they demand the attention of everyone below with torrents of rain and crashing thunder and lightning. But not the Cirrus. This is a high, delicate, ice-crystal cloud, whose name means a lock of hair in Latin, and it is never the sort to cause a commotion.

Aren’t the quieter souls always the ones worth listening to? This is certainly the case with the Cirrus. The cloud’s beautiful locks were described by hippie songwriter, Joni Mitchell, as ‘rows and floes of angel hair’. These can sometimes look neatly combed, like the Cirrus ‘fibratus’ shown above, and sometimes messy and dishevelled (known as Cirrus ‘intortus’). Whatever the formation, when the streaks or fibres are spreading and stretching and joining together to form a layer that covers the sky, the Cirrus contains a message about the weather approaching.

In the mid-latitude regions of the world, such spreading and thickening high clouds can be among the first indications of a ‘warm front’ arriving. This is an advancing mass of warmer, often moister, air that can mean steady rain in a day or so. Cloudspotters in these regions should keep an eye out for the behaviour of Cirrus. They’re not so much floes of angel hair, as tufted whiskers of a wise man’s beard. He’s a genial old fellow, who’ll tell of the weather in store. But he speaks in a whisper, and only those who care to pay attention will ever be able to hear.