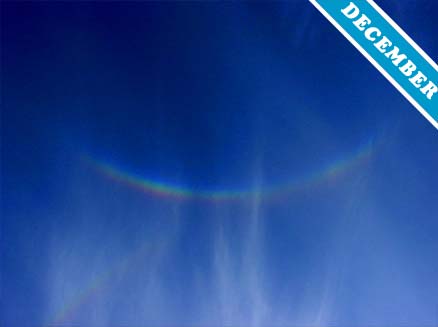 The cirrostratus is surely the most understated of all the cloud types. It is a thin, milky veil, spread out high across the heavens, and it is often almost transparent.With such subtle shades, it is a cloud that is ignored by most members of the public.

Of course, cloudspotters are not most members of the public. They know to keep a keen eye to the skies when this delicate layer of ice crystals first appears. Though it arrives without fanfare, the cirrostratus (along with some of the other high clouds) often comes with the most beautiful of optical surprises up its icy sleeve. These result from the diffraction of sunlight through the cloud’s array of tiny ice-crystal prisms.

Our favourite of these ‘halo phenomena’ is being demonstrated by the delicate layer of cirrustratos above. It is officially known as a ‘circumzenithal arc,’ for it forms high above the Sun, with its axis at the zenith. The name is, of course, most inappropriate for such a beautiful effect. It should really be called a ‘cloud smile’.

This is just one of twenty five or more arcs and halos that ice-crystal clouds can cause at different angles and orientations to the Sun or Moon. They have names like ‘parhelic circle’, ‘anthelion’, ‘120¾ parhelion’, ‘Tricker arc’, ‘Parry arc’ and ‘Hastings arc.’ Some only form in the dry, icy air around the Poles.

Most people may never notice even the most common of the halo phenomena, but does the cirrostratus care? No, it just smiles down silently from the heavens, content in the knowledge that the colours of its own arc are both brighter and purer than those of the oh-so-familiar rainbow.