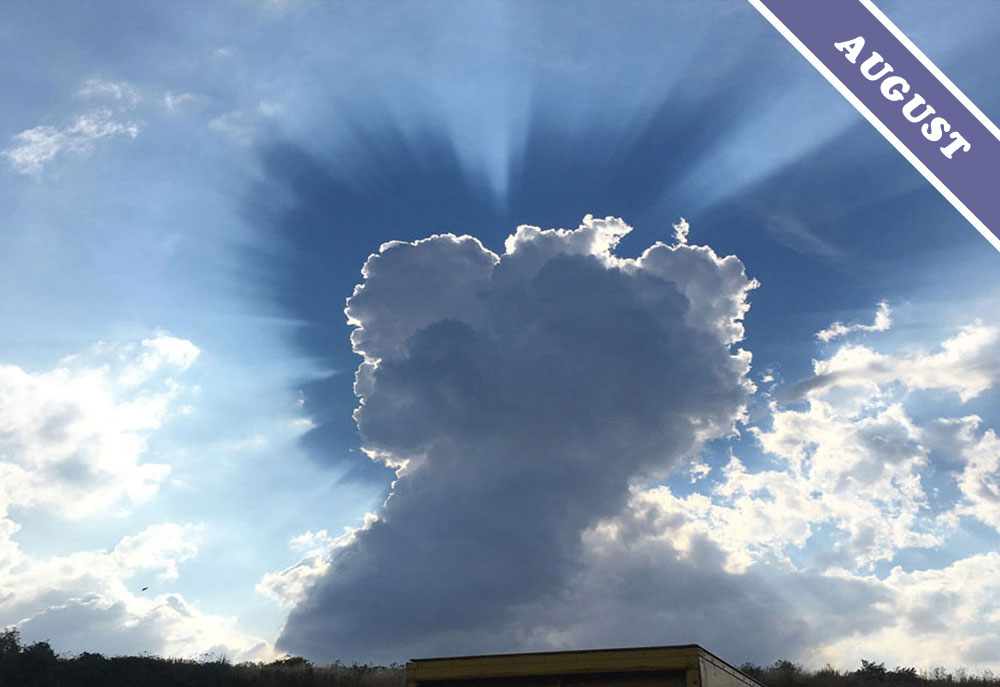 When a towering Cumulus congestus cloud holds its fist to the air like this, you know it is standing up for cloud power. And no wonder, Cumulus congestus are powerful clouds. This one spotted by David Elphick (Member 7,369) over Curdworth, North Warwickshire, England comes with added drama courtesy of the optical effect known as ‘crepuscular rays’.

You might wonder why a Cumulus would ever be described as a powerful cloud. Isn’t this, after all, the fair-weather cloud, the ‘Simpson cloud’, the one that drifts along in the breeze on a sunny day? Those summery cottonwool balls only tend to remain small – in the form known as humilis – when there’s high pressure and the air all around is sinking slightly. This tends to keep under control the rising columns of air, known as thermals, upon which the Cumulus clouds develop. When the air above is not sinking, when lower pressure is the norm, the rising thermals are not held down. This is when the little humilis form of Cumulus can develop through the day, growing through the middle stage, known as mediocris, into the rising towers of congestus.

As a Cumulus grows, so does its power. The formation of each new droplet within the cloud releases a tiny amount of heat. This release of heat happens when any gas, such as water vapour, condenses in to liquid. The more droplets that form within the growing cloud, the more of this ‘latent heat’ is released, adding to the energy of the thermal, encouraging it to rise faster and higher. If unchecked by changing conditions the Cumulus congestus can develop by afternoon into Cumulonimbus storm clouds.

And what about the fancy starburst? Crepuscular rays like this occur when the shadows cast from a cloud are rendered visible as they are scattered by atmospheric haze. Though the rays are as good as parallel, they splay out like this due to the effects of perspective when they point towards you. The effect of the fan is particularly pronounced when the haze is concentrated into a layer below the cloud. Here, a very subtle layer of droplets, so delicate that it can barely be described as a cloud, acts as a translucent canvas onto which the shadow is being cast from the cloud top above. The delicate haze of droplets is visible only by the way it scatters the sunlight to show the contrast between light and shadow. Providing a more subtle expression of cloud power, this most understated of cloud layers is in fact responsible for the drama that fans the ego of the mighty, towering Cumulus congestus.