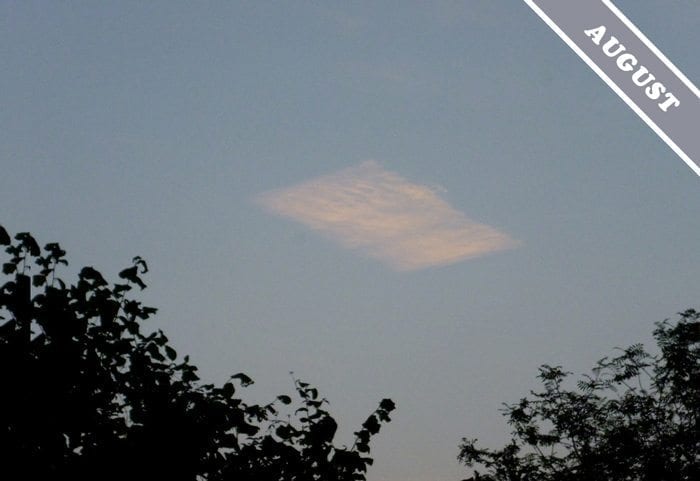 A Flying Carpet over Exeter.

This month’s image, which rightfully belongs in our ‘clouds that look like things’ section, had residents in Exeter, UK, gazing up in disbelief as what looked like a flying carpet passed overhead. As a spokesman for the UK Met Office explained to the local press, the cloud was a small patch of condensation trail, or contrail, formed from the exhaust of an aircraft.

Water vapour is one of the gases produced by the combustion process, and so is present in the exhaust of jet engines. When the air conditions are right, this invisible gaseous water can condense into visible droplets or ice crystals because it cools rapidly as it mixes with the surrounding air. These visible droplets or crystals only form, however, when the air the plane is flying through is cold enough and moist enough to encourage water vapour to condense and freeze. Our atmosphere is very stratified, which means that temperature and moisture content in one layer can differ considerably from another – often with abrupt boundaries between the two. So when aircraft climb or descend, they sometimes pass from a layer that isn’t conducive to the formation of contrails into one that is, causing the contrail to appear abruptly at a certain point in its wake. In the case of the flying carpet over Exeter, the contrail-inducing layer was very shallow. As the aircraft climbed or descended through it, the exhaust only formed a short strip of visible cloud.

In this case, the wind also happened to be blowing perpendicular to the flight of the aircraft, or sideways across the length of the contrail. This caused the ice crystals to spread outwards, creating the clearly defined, rectangular rug shaped cloud.