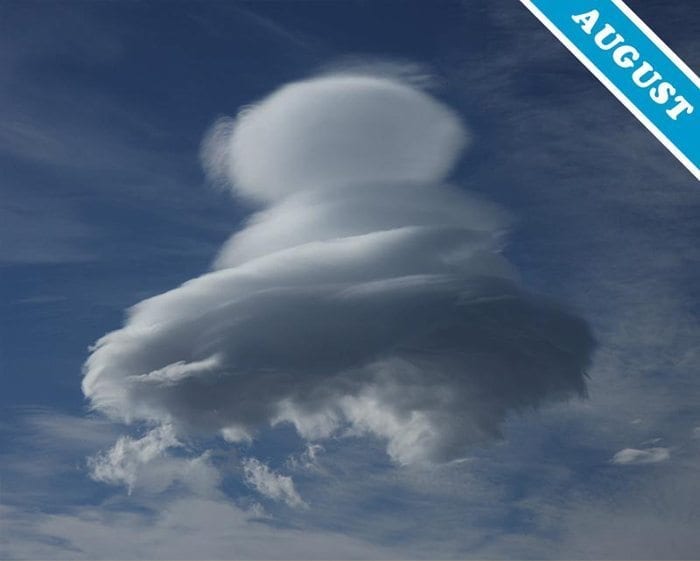 The cloud species known as lenticularis is one of our favourite formations — not least because it often has the appearance of a UFO. The cloud’s name comes from the Latin for a ‘lentil’, presumably because no one could work out what the Roman’s would have called a flying saucer.

We like the way that this cloud hovers in place, even though a brisk wind is blowing at the cloud level. The cloud forms when the lower atmosphere is ‘stable’, which means that an airstream passing over raised ground, such as a hill or mountain, tends to rise and dip in a wavelike path. It is rather like the standing waves that hover on the surface of a fast-flowing stream in the lee of a rock. Lenticularis clouds can form downwind from the peak, at the crests of these invisible sanding waves of flowing air*.

But we particularly like it when lenticularis clouds take on the stacked formation, known as a ‘pile d’assiettes’, or ‘stack of plates’ in French, like the handsome Altocumulus lenticularis shown above. This type of stacked lenticularis only appears when the airstream encountering the raised ground consists of alternating moister and drier layers. The cloud droplets form as the moister layers cool upon rising at the crest of the standing wave, but are far less plentiful in the drier layers of air in between. Pile d’assiettes is the only internationally accepted cloud term that is in French rather than Latin.

When the atmosphere in the region is particularly stable, even just a gentle raising of ground level can be enough set up the waves of air that produce lenticularis clouds.