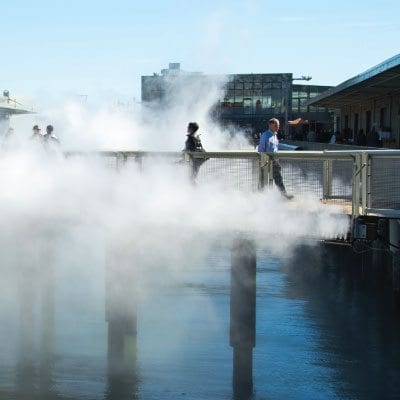 November 10, 2013 In Attention All Cloudspotters

The San Francisco Bay Area is famous for its foggy conditions. So when Japanese artist, Fujiko Nakaya, was asked earlier this year to design a bridge for the city’s Exploratorium science centre she decided to make a Fog Bridge. Along the sides of the bridge was a series of 800 nozzles spraying a fine mist of water droplets into the air, which shrouded the walkway in a swirling blanket of cloud.

We at The Cloud Appreciation Society have long been fans of Fujiko Nakaya. She has, after all, made fog and cloud installations her lifetime’s work. Her passion for foggy art began back in 1970 when she engulfed in cloud the Pepsi Pavilion of the Osaka Expo. Recently, she created a Fog Square in Paris, while her 2011 Cloud Parking was installed in a rooftop car park in Litz, Austria. Nakaya uses a cloud-generating system that she devised with her long-time collaborator, the California-based cloud physicist Thomas Mee. High powered pumps capable force water through copper pipes dotted with nozzles. The nozzles have openings as small as 160 microns, or six-thousandths of an inch, in diameter and are fitted with microscopically sized pins that atomize the water into billions of ultra-fine fog droplets. Each of these measures between fifteen and twenty microns in diameter.

Her Fog Bridge in San Francisco:

Her Fog Square in Paris: