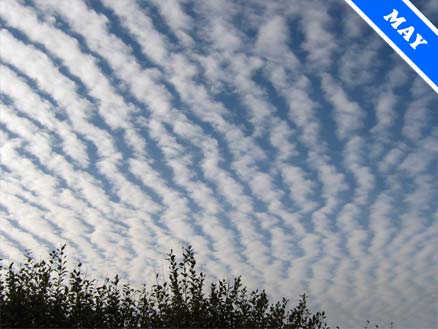 (Click image to enlarge)
Photographed over Limekilns, Fife, Scotland © Dennis Cowan (see it in the gallery)

All clouds with ‘undulatus’ in their name have wave-like features to them. The name is derived from unda, the Latin word for a wave. Sometimes, they are in the form of a continuous layer with an undulating surface. Other times, they are like lines of cloud with gaps in between, as in this fine Altocumulus undulatus, spotted over Fife in Scotland.

It is the way the winds vary with altitude that tends to cause these formations. When blowing at different speeds above and below the cloud layer, the wind can cause the cloud to bunch up into ridges, which curve, join and divide, like the lines on your finger.

Of course, the shearing winds that cause undulatus clouds are never visible. You have to be a cloudspotter to know that they are there. Who else would recognise the enormous fingerprints they’ve left across the sky?

2 thoughts on “Altocumulus undulatus (May 07)”