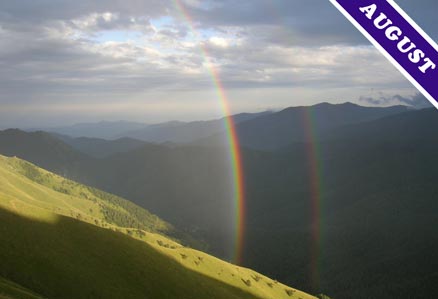 (Click image to enlarge)
Photographed over the Alpi Marittime in Liguria, Italy © Remo Mattè (see it in the gallery)

No, this is not the name of a goth group from the 1990s.
‘Alexander’s Dark Band’ is in fact an optical phenomenon associated with rainbows. It is the darker-looking region of sky between the arcs of a primary and a secondary rainbow. The band is named after Alexander of Aphrodisias, who first described the phenomenon in around 200AD.

Standing with the sun shining from behind onto a rain shower ahead, a cloudspotter can see a rainbow when the light passes through the raindrops and reflects back off their inside surface. As the it enters and emerges from the droplets, the sunlight is separated into different wavelengths, producing the colours of the rainbow.

Sometimes, a secondary bow is also visible outside the primary one. This is the result of the light passing into the droplets at a different range of angles and being reflected not once but twice off their inside surfaces back towards the cloudspotter. This secondary bow is fainter than the primary one, with a reversed order of colours. Due to the optics*, the rain in the space between the two bows scatters less light towards the cloudspotter than elsewhere, causing it to appear darker. This is Alexander’s Dark Band.

Besides his description of this subtle optical phenomenon, Alexander of Aphrodisias is best known for his commentaries on the philosophy of Aristotle. He did, however, write some of his own original works too. Since one of these was entitled ‘On The Soul’, we wonder whether this early cloudspotter did in fact have a Classical Greek pop group of his own called something like ‘Alexander’s Funky Band’.

* For fuller explanations of this and other optical phenomena of the air, see Les Cowley’s excellent Atmospheric Optics website.