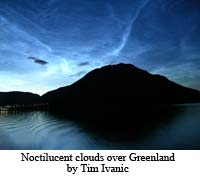 On 25th April 2007, NASA launched a satellite to study the Earth’s highest clouds. Now orbiting at an altitude of 375 miles, the AIM satellite (which stands for ‘Aeronomy of Ice in the Mesosphere’) is the first to be dedicated to the observation of the most mysterious of all the cloud types: Noctilucent clouds.

These clouds typically form at altitudes of between 30 and 50 miles, in a region of the atmosphere called the mesosphere (the one above the stratosphere). They are therefore way higher than most clouds, which tend to form in the lower 10 miles of the atmosphere. Being so far up, Noctilucent clouds catch the sunlight well after sunset, and so can shine bright against the darkening sky. They tend to be bluish-white, with a beautiful rippled texture. Their name is Latin for ‘night-shining’.

We know very little about how and why Noctilucent clouds form and scientists are keen to find out more since. Traditionally seen only towards the poles, they are now being observed at lower latitudes and more frequently than ever before. This has led some scientists to speculate that they are indicators of global climate change. Hence the AIM satellite mission.

Video of the AIM launch:
http://www.youtube.com/watch?v=xnWnur5KxPM&NR=1

More about the AIM launch to study Noctilucent clouds:
http://spaceflightnow.com/pegasus/aim/