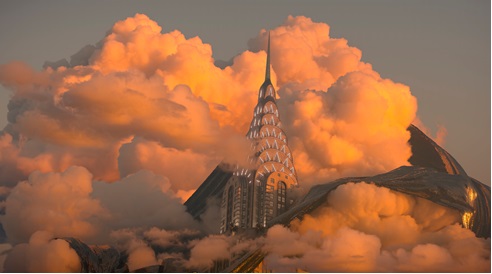 CGI artist and painter, Matt Wilson, has sent in his series Surreal Cloudscapes.  Matt created the CGI cloudscapes in the recent ‘Lightyear’ Pixar movie, but during Covid isolation he began experimenting with creating cloudscapes on his own.  He calls his art series Sentinels, and they were recently featured in the Solo Show in New York City.

Matt explained to us how he goes about creating clouds on computers.  “Clouds are elusive creatures”, he told us, “and as such require a wide spectrum of methods to represent their forms and movement. Even with today’s massive computing power they still push the edge of the technology, which for me reiterates their magic out in the real world. In movies, television or games, any time you see a puff of smoke, or a cloud or fog or any “volumetric” effect, they are typically represented by something called “voxels”, or volume pixels. Essentially little cubes filled with a certain amount of “density” or a given substance (water droplets, smoke, etc)… often billions of them (yes that does take up a LOT of data storage).  You can stack those cubes into a shape by either sculpting it into place, like a sculptor with clay, or you can use the much more complex process of using physics simulations to choreograph the volume into place. Both are equally fun but the later of the two gives you the opportunity to try to understand the underlying physics”.

We asked Matt to explain how he references real clouds when sculpting his digital ones.  “

Observation and understanding are my first steps,” he explained.  “Combing through the years of C.A.S. images, google image search and my edition of the cloud spotters guide is usually where I begin. I go about my simulation setups by trying to evaluate the source of humidity from the ground up and then the surrounding atmospheric conditions; temperature gradient as the cloud rises up in the air, sheering forces and turbulence. Mammatus undulatus is a great example of a cloud formation where the shape of the turbulence is much easier to visually see, relative to other more complex cloud types like cumulus fractus. You can think of the overall cloudscape as a recipe… a combination of several of types at various altitudes. You begin with a big cumulus congestus formation built using a simulation surrounded by some hand-placed, sculpted, cumulus humilis clouds and “ice the cake” with a layer of altostratus clouds that can be sculpted using some fractal math”.

We think the clouds are really convincing and we’re so pleased that the real clouds on the CAS Photo Gallery have served as inspiration.

You can see more of Matt’s work on his website