This beautiful, sterling silver cloud pendant has been hand-crafted by jewellery designer/maker Sheila Raven at her studio in Oxfordshire, England. It hangs from a tightly-woven, sterling silver box chain. 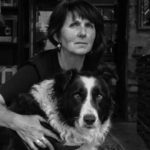