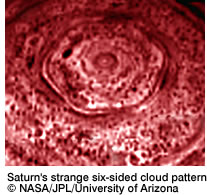 No one has seen anything like it anywhere else in the solar system. Unlike some of our individual clouds which look like a hexagon, the Saturn cloud pattern appears to have six well-defined sides of nearly equal length. Even stranger, it maintains its structure while rotating (see it spin). It is also huge: four Earths could fit inside it.

Originally discovered during NASA’s Voyager fly-bys in the 1980s, the recent infrared image taken by the Saturn-orbiting Cassini spacecraft, above, shows this cloud pattern is remarkably stable and may continue to baffle scientists for some time to come. Read more about it here.