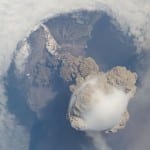 Russia’s Sarychev Peak Volcano erupted for the first time in 20 years on 12th June 2009. This photograph was taken by the Astronauts aboard the International Space Station who where flying directly overhead.

It has been called one of the most dramatic Earth-science photo’s ever taken from space and shows the pillar of ash punching a massive hole in the cloud layer. The misty ‘cap’ on the ash plume is thought to be water condensing from air shoved upward by the rising ash column, similar to the iridescent pileus clouds.

You can read the full article on the spaceweather.com website.