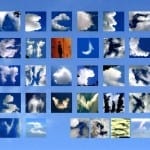 Cloud Appreciation Society member Danièle Siebenhaar who hails from Switzerland has been searching out a cloud alphabet. She has been hunting clouds in the shape of letters and has now found all of them, from A to Z.

Danièle uses her images to produce birthday cards for friends and family. We congratulate her on her achievement, and think that she should release the images as a typeface – that way, we can use it instead of Helvetica when we next send out the Cloud Appreciation Society newsletter.

Her cloud alphabet was reported in the UK’s Metro newspaper and the Swiss newspaper, Tages-Anzeiger. Proud as she is of her collection, Danièle insists that some of her letters don’t look as clear as she’d like, and so she has vowed to continue her important alphabetic quest.

5 thoughts on “Letters in the Sky”