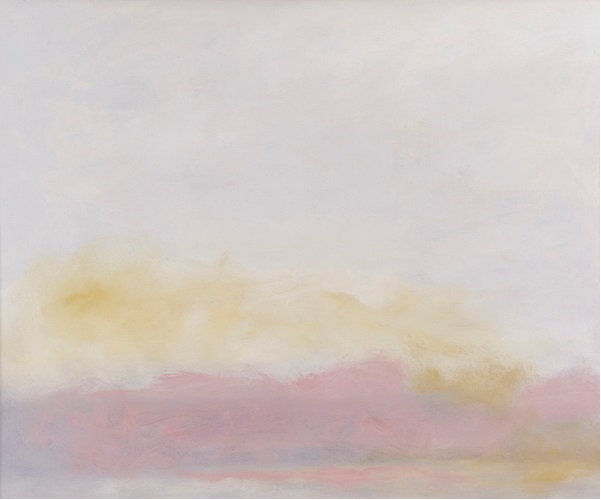 Diana Ewer is curating an exhibition of Skyscape cloud paintings by American artist Jon Schueler (1916-1992) entitled “Reflections on the Sound of Sleat”. The exhibition will be at the Caledonian Club, London and will run from 29th September to 4th November 2022.

“Jon Schueler: Reflections on the Sound of Sleat” on view in the Caledonian Club’s newly renovated drawing room from 29th September presents a seminal exhibition of Scottish abstract skyscapes. Described as “A home away from home for Scots in London”, the club would undoubtably have appealed to the late American painter Jon Schueler (1916-1992) who was a Caledonophile at heart.

A member of the Second-Generation Abstract Expressionists, whose mentor at the California School of Fine Arts was Clyfford Still (1948-1950), Schueler, having achieved both critical and financial success in New York with the Leo Castelli Gallery, set off to the Western Highlands in 1957. Settling in the small fishing village of Mallaig, he found in the Scottish landscape, most notably in the Sound of Sleat’s weathering skies, a source of intense feeling and expression that would become a constant touchstone and enduring influence on his paintings. In 1970 Schueler returned, to establish a new studio at Romasaig, a former schoolhouse by the sea, just a mile from Mallaig. The artist would paint there year after year until his death in 1992.

These seven Romasaig skyscapes from the 1970s and 1980s are as vibrant as the day they were painted and can be interpreted as distillations of Schueler’s direct experience of the constantly shifting weather. These works are deeply personal, revealing through layer upon layer of paint, an artist who tirelessly dedicated himself to capturing the evocative and fleeting moods of the sky on canvas. “In Scotland, I have looked each day at the lonely horizon, at that line (or is it a line?) where the sea and the sky meet. I have tried to understand it and tried to know how to paint it and what the painting of it might mean. I have seen the light immediately above and I have seen the light immediately below. I have tried to understand the shadow and the reflection upon reflection.” I But these paintings also hold a universal appeal, especially resonating with those who are familiar with the ever-changing dramatic sea and skyscapes of the Isle of Skye and beyond.

“Building on the artist’s recent London retrospective in 2019 at Waterhouse & Dodd, it is an honour to show Jon Schueler’s paintings in the company of the Caledonian Club’s own fine art collection. We hope the show will encourage further interest in the artist’s work, and that Schueler’s skyscapes will strike a deep emotional connection with those familiar with the coast of the Western Highlands.”
Diana Ewer, Curator for the Jon Schueler Estate.