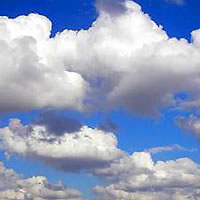 All white now: plans to spray clouds with
salt to help them reflect sunlight

Listening to the news yesterday, you might have been forgiven for thinking it was April 1, not September 1.

The BBC soberly reported that scientists were considering using wind-driven ships to spray salt into the air to make clouds whiter so they could reflect more solar energy and help reduce global warming.

Stranger still, it turns out this is just one of the ingenious ideas discussed in a special edition of the Royal Society’s journal devoted entirely to the pros and cons of geo-engineering, large-scale interventions to help modify the Earth’s climate.

Others include blocking sunlight by floating mirrors in space, using rockets to spray sulphur into the upper atmosphere, and seeding the oceans with iron to trigger plankton blooms that would draw carbon from the water before locking it away on the sea bed as the plankton died and sank to the bottom.

The cloud-seeding idea is explored in a section called “Sea-going hardware for the cloud albedo method of reversing global warming”.

It explains: “Wind-driven spray vessels will sail back and forth perpendicular to the local prevailing wind and release micron-sized drops of seawater into the turbulent boundary layer beneath marine stratocumulus clouds. The combination of wind and vessel movements will treat a large area of sky.

“When residues left after drop evaporation reach cloud level they will provide many new cloud condensation nuclei giving more but smaller drops and so will increase the cloud albedo to reflect solar energy back out to space.”

But before you think it’s ok to leave all the lights on and take your 4 x 4 out for a spin, the Royal Society makes it clear such schemes would only tackle the symptoms, not solve the problem.

“None of these technologies will provide a ‘get out of jail free card’,” said Martin Rees, President of the Royal Society. “They must not divert attention away from international efforts to reduce emissions of greenhouse gases.”