Members and visitors might have enjoyed the fantastic collection of fallstreak-hole photographs displayed on our photo gallery. Also known as ‘hole-punch clouds’ these formations occur when part of a cloud of water droplets freezes into ice crystals. Scientists have known for some time that the effect occurs when the ice crystals grow large enough to fall below as a fallstreak. But what has always been unclear is quite why the freezing starts in one particular region of a cloud layer and how the hole grows in size, sometimes reaching 50km across an hour after the hole began. Now, research published in Science magazine has helped explain some of the mysteries of these beautiful fallstreak holes. 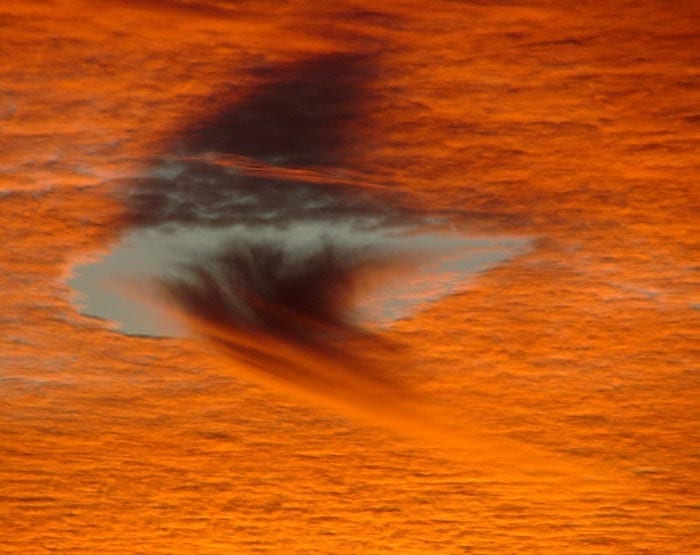 A fallstreak hole at sunset over Jay, Florida, US. © Vicki Harrison.

We already knew that, for the hole to form, the droplets in the cloud layer need to be ‘supercooled’. This means that they are at a temperature below 0˚ Celsius, but have yet to frozen. In fact, cloud droplets can and do often remain liquid at temperatures well below the freezing temperature of a glass of water down here on the ground. When in the form of tiny droplets, water needs a nucleus of some sort to be encouraged to freeze – a tiny particle of some sort that it can get started on. Without one of these icing nuceli present, droplets will resolutely refuse to freeze until the air temperature drops to as low as –40˚ Celsius.

But what gets the freezing started in one region of the cloud? The research has confirmed the long-held suspicion that an aircraft flying through the cloud can be enough to set off the freezing process. The expansion of the air as it passes over the aircraft wings and (for certain types of plane) over the blades of its propellers, causes it to cool. This momentary cooling can be enough to take the temperature down low enough for the droplets to start to freeze spontaneously, even though there aren’t enough icing nuclei around for the droplets elsewhere to freeze. 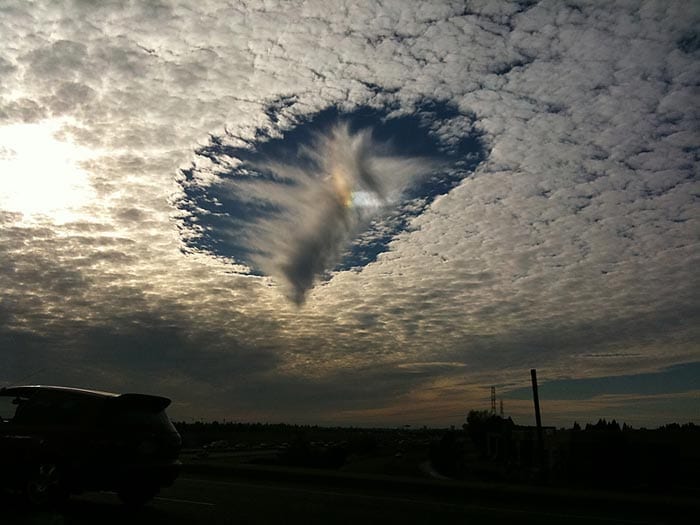 The ice crystals in this fallstreak hole over Sacramento, California, US, are refracting the sunlight to produce an optical effect known as a sun dog. © Danny McNeal.

The research also proposed a way by which the freezing water might cause a hole to expand outwards from the point where the plane flew through the cloud. When the droplets change into solid particles, they give off a tiny bit of heat – enough to cause the air to expand and rise a little. In reaction to this rising current, the surrounding air sinks slightly. As the air around the frozen fallstreak sinks and warms up, the droplets there evaporate. This seems to be the method by which the fallstreak of ice crystals produced by the plane climbing or descending through the cloud layer forms a circular hole that appears punched out of the cloud layer.

If the plane is passing through the cloud at a more shallow angle, it causes a line of cloud to freeze, producing a cigar-shaped hole, somtimes known as a canal cloud (see below). You hear Cloud Appreciation Society founder, Gavin Pretor-Pinney, speaking about this beautiful cloud effect to National Public Radio in the US and you can read more about the new research in New Scientist Magazine. 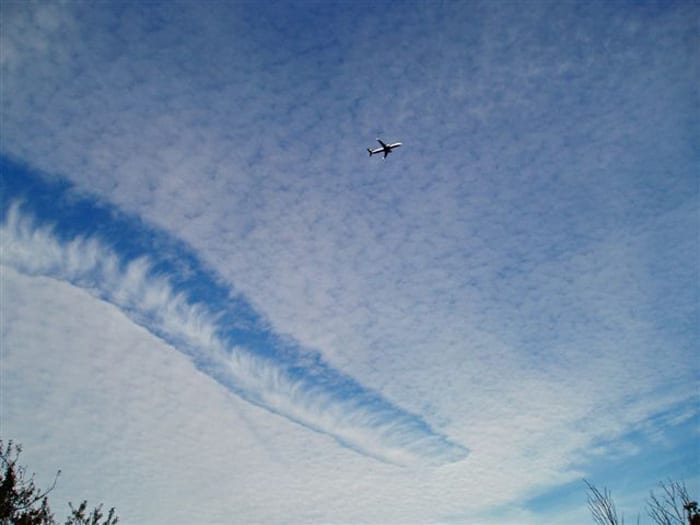 When a plane passes through the cloud layer at a shallow angle, it can cause a line to be cut from the cloud, known as a canal cloud or a distrail (short for dissipation trail). Spotted over Broxted, Essex, UK. © Michael Holt.

19 thoughts on “A New Understanding of Fallstreak Holes”